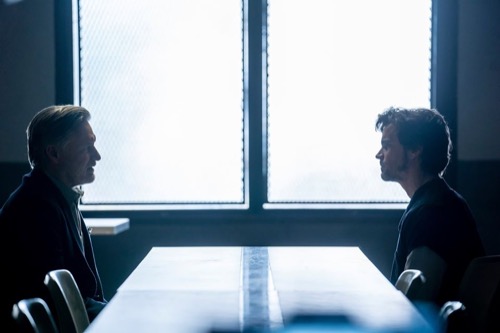 Tonight on the USA Network their new drama The Sinner premieres with an all-new Thursday, March 26, 2020, and we have your The Sinner recap below. On tonight’s The Sinner season 3 episode 8 “Part VIII” as per the USA Network synopsis, “Jamie seeks vengeance, putting him on a collision course with Ambrose.”

Jaime is leaving the golf course after it looks like killing a law enforcement agent. He heads to a diner in season 18 girl taking selfies. He notices the police go by as he continues to eat. Meanwhile, Ambrose is at the golf course assessing the scene. He is distraught over the captain’s death. Forensics arrives. They put a bolo out on Jaime. Forensics comes back to Ambrose. They hand him a letter that they found addressed to him in the captain’s pocket. Ambrose opens it. It’s a numbers game and it’s from Jaime, listing all the people he might kill.

Ambrose calls his daughter and warns her that somebody might be out to hurt her and his grandson. Meanwhile, Jaime is watching a bunch of kids gets out of karate. Ambrose calls Sonya and tells her she has to leave her house. He tells her about Jaime and she agrees to find a safe place to go.

Ambrose heads to his daughter’s house. Her son is missing. He leaves behind several officers to watch her. Sonia is hiding out. She hears a noise and looks out one door. Jaime comes in another. He approaches her and asks her how her portrait is coming. He tells her that he has come to kill her. She tells him that she doesn’t think he wants to do that. He confesses that he is killed, three people. She tells him he can stop now. He has a choice. She keeps trying to talk him out of it but he finally pulls out of the pocket knife, a large one. Just them police sirens are heard. He doesn’t stop trying to attack her just yet. By the time the police come in, he’s gone.

Back at the station, Sonya and Ambrose talk. He asks if she knows anything about where his grandson might be. She tells him he didn’t say but not to approach him alone.

Ambrose tells his team that Jamie has to be in the area and he has his grandson. He is doing all of this to bring him to the edge, to torcher him, as he feels.

Jamie is in the woods. He comes to the roadside and sees several police. He hides, waiting for nightfall and then traveling to Leela’s. He appears at her house while she is in the kitchen. She is speechless and scared as she watches him stare at her through the sliding glass winter. She walks closer and they touch through the glass. She cries while he smiles sadly. She continues to cry while he backs up slowly and leaves.

Jamie calls Ambrose. He tells him he can see his grandson but he has to come alone. Ambrose arrives at home. He gets out with his gun ready but Jamie comes out of nowhere. He overpowers him and brings him inside. His grandson is there. Jamie makes him put headphones on and sit in a chair while he talks to Ambrose. Jamie has a new numbers game for him to determine if his grandson lives or dies.

He wants Ambrose to play the game. Ambrose pushes him telling him he won’t. He can kill his grandson and then he will have no-one left that understands him when Ambrose is gone. They fight. The gun goes off. Ambrose tells his grandson to run. He follows after him after pushing Jamie to the wrong. They run into the dark woods. Jamie follows.

Jamie finds Ambrose out in the woods, injured after being shot. He is bleeding. They fight. They make their way back into the house. Jamie gives up his gin while Ambrose keeps his pointed at him. He talks about how this is their fate, they are one another’s fate. And if it isn’t him, its something else coming over and over again. Ambrose shoots him in the abdomen.

He heads outside and calls it in. After he heads back in. There is a lot of blood. Ambrose gets him a towel and applies pressure. Jamie wants to know why he hates him. Ambrose tells him he doesn’t. He tries to get him to stay calm. Jamie panics and coughs up blood. Ambrose comforts him for several minutes, holding his hand until he dies on the floor.

Back up arrives and they take Jamie’s body out. His grandson is at the station. It’s over. Later, Ambrose heads to see Sonya. They talk while she cooks. She asks what Jamie was like at the end, telling him he doesn’t have to answer. He shares that he was scared before sobbing. She comforts him.