The Young and the Restless Spoilers: Adam or Nick, Which Newman Is Superior – Y&R Fans Settle Ultimate Brother Battle

BY Heather Hughes on May 5, 2020 | Comments: Leave Comments
Related : Soap Opera, Spoiler, Television, The Young and the Restless 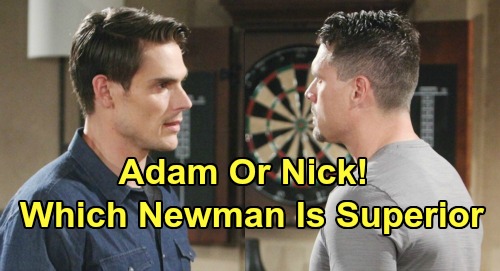 The Young and the Restless (Y&R) spoilers tease that Adam Newman (Mark Grossman) and Nick Newman (Joshua Morrow) will remain at odds. Y&R fans know the Newman brothers have a contentious relationship – and that’s not going to change anytime soon. Nick already had plenty of reasons to hate Adam, but Adam’s latest blackmail plot really sent Nick over the edge.

Since Nick and Adam’s war is worse than ever, now’s a good time to reevaluate these characters. We have to ask an important question: Who’s the superior Newman brother? To help you make your choice, let’s take a closer look at Adam and Nick’s actions. We also have to mull over their attitudes, weak spots and portrayers.

First, there’s dark and manipulative Adam. He’s a more complex character than Nick, so that scores Adam some points. Some Young and the Restless viewers feel like Adam’s mistakes are what makes him interesting.

Adam’s willing to stand against the Newman clan, which can be refreshing when the rest of them sometimes bow to Victor Newman’s (Eric Braeden) crown.

Adam also completely adores Chelsea Lawson (Melissa Claire Egan) and Connor Newman (Judah Mackey). There’s no denying that! Adam’s capable of love, but he’s a pretty messed-up individual. Some of that’s Adam’s fault, but some of the blame goes on the Newmans.

There have certainly been times when Adam tried to make amends and gain acceptance, but he’s always treated like the black sheep. It’s no wonder Adam just gave up and took what he wanted.

We also have to acknowledge that Nick can be a bit of a hypocrite at times – like when he punched Adam in the park and then told Connor fighting is never the answer.

Letting your abused sister think her abuser had returned or stealing the CEO seat from her? Nick likes to pretend he’s the better man, but is his actions haven’t always proven it over the years.

However, Nick does have more of a moral code overall. The fact that Joshua Morrow’s been in the role for so many years also carries some weight. People love Morrow as Nick and always have.

It’s perfectly fine to prefer Nick just because he’s been on your screen for what feels like forever. Mark Grossman is a fantastic recast, but maybe that can’t compete with Morrow’s history for you.

Nick also cares about his family and loves hard, so that might make him superior in your eyes. Victor trusts Nick more than Adam – and plenty of Y&R fans do, too.

There are some excellent reasons to like Nick better if you think Adam simply goes too far. Nick’s dark side revs up occasionally, but darkness is Adam’s whole state of being lately.

It’s not an easy call, but we’re asking you to choose: Do you prefer Adam or Nick? Which Newman brother is superior? We’ll keep you posted as other Y&R news and updates emerge. The Young and the Restless spoilers say some exciting Newman drama’s ahead, so stay tuned. Stick with CDL for all the latest Young and the Restless spoilers, updates and news.