BY Heather Hughes on May 3, 2020 | Comments: Leave Comments
Related : Soap Opera, Spoiler, Television, The Young and the Restless 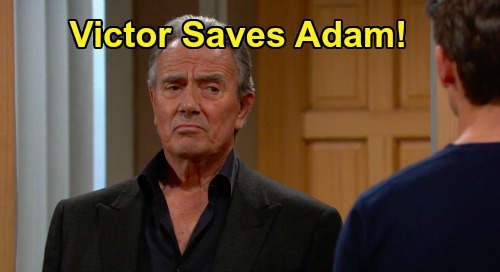 The Young and the Restless (Y&R) spoilers tease that Adam Newman (Mark Grossman) will eventually face the reality of what he did. Adam doesn’t believe Victor Newman’s (Eric Braeden) tale about him killing AJ Montalvo as an 11-year-old boy, but he will at some point.

There’s a good chance Adam will face a memory flood now that the story’s been told. Adam may remember bits and pieces until the whole ugly incident runs through his mind. The Young and the Restless spoilers suggest that should be a pretty traumatic experience for Adam, who blocked it all out when he was just a kid.

Adam’s an adult now and can cope with this news in time, but realizing it’s true could bring another realization. Victor went to great lengths to cover up Adam’s actions and keep him in the dark. There have been plenty of times when Victor could’ve used this information against Adam over the years.

Victor viewed this incident as off limits, so that says a lot about how much Victor cares about Adam. No matter how vicious their war got over the years, Victor never brought up AJ’s death. It was forgotten as far as Victor was concerned – something he never wanted Adam to know.

Victor could’ve just blurted out the real story when Adam presented the evidence. Since Adam had proof of the cover-up, Victor could’ve explained that Adam was responsible right then and there.

Instead, Victor bent over backwards to protect his son. He proved how much he loves Adam, which is something Adam may finally start to understand.

Adam wants Victor to trust him with important things like the future of the family business, but what has he really done to earn that trust? If someone tampered with Adam’s medication, would he be so quick to hand over the keys to the kingdom? Adam needs to look at this from Victor’s perspective.

Rebuilding trust takes time, but Adam grew impatient and ended up proving Victor was right not to trust him. Blackmailing his own father wasn’t the way to prove himself. Once Adam accepts that Victor shielded him from the knowledge that he killed AJ, will that make a difference?

Adam has always felt like the black sheep of the Newman family, but Victor’s buried secret shows his son means a lot to him. It’s Adam’s behavior that’s the problem. If Adam can change that behavior, there’ll be a path to reconciliation for Adam and Victor.

Victoria Newman (Amelia Heinle) has earned the Newman throne, but maybe Adam could revive Dark Horse like he talked about. Victor could help Adam go legit and become a big success.

Adam would need new offices now that Chancellor Communications has moved into Dark Horse’s old turf, but that would only seal the deal on this new beginning. It’d just make for an even fresher start.

Do you think Victor’s protective side will help Adam see the light? Will this father finally reconnect with his son and help him find a better path? As other Y&R details become available, we’ll offer the latest updates.