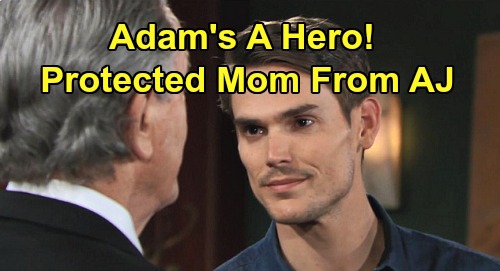 The Young and the Restless (Y&R) spoilers reveal that there are some big problems with one story on the CBS soap. Y&R fans know Adam Newman (Mark Grossman) stumbled across what he believed was amazing leverage against Victor Newman (Eric Braeden). With Alyssa Montalvo’s (Maria DiDomenico) help, Adam thought he had this Kansas mystery all figured out.

Adam assumed Victor’s cover-up was proof that his father murdered AJ Montalvo. However, Victor later revealed Adam himself was the killer. He explained that 11-year-old Adam went after AJ, who was threatening Hope Wilson (last played by Beth Toussaint).

Since Adam blocked out the memory, Victor has spent all these years protecting him from this deep, dark secret.

Of course, we have to ask: Is the secret really all that dark? Adam reacted to this menacing man who was threatening his poor mother. As Victor pointed out, Adam was scared out of his mind. Was Adam going to cower in the corner and let big, bad AJ take Mom down? No way! Our young hero Adam was brave!

Adam faced his fears in that moment and kept Hope safe. AJ – a potentially violent intruder – was terrorizing Hope. For all Adam knew, Hope could’ve died without his intervention. Adam was just a boy, but he did whatever it took to defend Hope.

Honestly, that sounds like a heartwarming news story. Give the kid a medal, right? Why is Victor acting like this is going to ruin Adam’s life? This doesn’t seem like something Adam would truly care about or blame himself for.

There certainly shouldn’t be criminal charges for Adam’s part in it. Adam was a minor who acted in defense of his mother. Victor’s the one who came along and covered it up, so that’s not Adam’s fault.

Hope was pleased that Adam couldn’t remember what he’d done, but what does it matter now that Adam’s an adult? He knows AJ was despicable and out of control. Adam has done FAR worse than this in his lifetime! That goes for both intentional crimes and accidents.

Adam inadvertently running over Delia Abbott (Sophie Pollono) is something that will haunt Adam forever. He didn’t mean to kill little Delia, but he’s indeed the reason she’s dead. Billy Abbott (Jason Thompson) shares some blame for leaving Delia alone that night, but Adam’s taken responsibility and knows he caused a brutal loss.

Delia was an innocent girl who was in the wrong place at the wrong time. AJ was an angry bully who could’ve done bodily harm to Adam’s mother. It’s easy to see why Adam would battle guilt over Delia’s death, but he shouldn’t be all that bothered by killing AJ.

Adam’s still in denial, but who cares if he did it? This isn’t some sinister shocker, so it’s silly for Y&R to act like it is. The Young and the Restless spoilers say there’s much more drama coming up in Genoa City. We’ll keep you posted as other updates emerge.

Do you think it’s strange for Victor to act like this secret’s so damaging? Adam was a hero, not a monster! CDL’s your hotspot for Young and the Restless spoilers, updates and news, so be sure to stop by frequently.