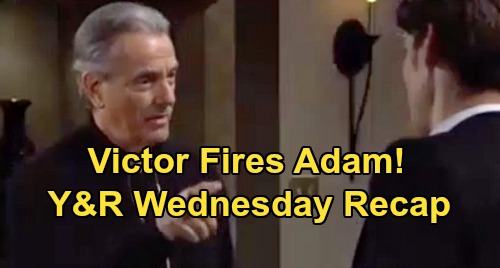 The Young and the Restless (Y&R) spoilers recap for Wednesday, April 22, teases that Victoria Newman (Amelia Heinle) will offer to protect Alyssa Montalvo (Maria DiDomenico) from Victor Newman (Eric Braeden). However, Alyssa will insist she isn’t fleeing out of fear. She’s leaving town because she found out the truth, but Victoria still won’t think Adam Newman (Mark Grossman) should get a pass for his actions.

Alyssa will think they need to have some compassion for Adam under the circumstances, but Victoria won’t agree. After Victoria argues that Victor protects Adam over the rest of the family, she’ll urge Alyssa to write another story.

Alyssa won’t think she owes Victoria anything and will want to end her involvement with the Newmans – she leaves the hotel room with Victoria looking stymied.

At the ranch, Victor will stand by the story that Adam killed AJ Montalvo. Adam won’t think that’s true, but Victor will talk about Adam stepping up as the man of the house when he was 11 years old.

Y&R spoilers say Adam will rant about Victor’s accusations. He’ll think Victor’s trying to argue that he was a cold-blooded killer as a boy, but Victor will insist Adam was scared out of his mind.

Victor will walk Adam through the story of how AJ threatened Hope Wilson (last played by Beth Toussaint). Adam tackled TJ to keep his mother safe according to Victor, but Adam won’t remember any of it. Victor will insist that’s because Adam blocked it out.

Adam was white as a sheet and in a catatonic state, so Victor ordered George the caretaker to move the body somewhere. The goal was to create a plausible cover-up story, so the body ended up in the barn loft. While Hope put Adam to bed, Victor handled the coroner and locked in this tale about AJ’s deadly fall.

Victor will add that Hope kept Adam away from AJ’s funeral to avoid jogging his memory. Adam will rage over Victor using Hope as part of this story he’s cooked up, but Victor will maintain that it’s the truth.

After Victor dismisses Adam’s proof, he’ll note that Adam’s life will be ruined if the story of AJ’s death gets out. Adam will suggest that they’ll see about that.

Victor lets Adam know that Newman CEO job is no longer his and that Adam has no choice in the matter. The Moustache also tells his son that Chelsea once told him that all Adam was really looking for was his father’s approval, unconditional love.

Victor says Adam will have to settle for knowing that keeping this secret all these years is proof of his loyalty and love for son. Adam appears stunned and flustered – but still in denial that he’s heard the truth.

At the Grand Phoenix, Jack Abbott (Peter Bergman) will talk to Phyllis Summers (Michelle Stafford) about Theo Vanderway (Tyler Johnson). Once Phyllis gets updates on why Theo was fired, she’ll contend that she knew he couldn’t be trusted. However, Jack will think Theo’s a good person deep down.

After talk turns to Phyllis and Nick Newman’s (Joshua Morrow) reunion, Jack will be glad to hear it. He’ll warn Phyllis not to mess it up before taking a call about a Jabot construction site. Since fossils were found, the site will need to be shut down.

An idea will spark for Phyllis, who’ll mention “bones” as she reflects by the elevator. It seems Phyllis just found another way to make sure Abby Newman’s (Melissa Ordway) rival hotel doesn’t get built.

Speaking of rivals, Summer Newman (Hunter King) will notice Kyle Abbott (Michael Mealor) doesn’t seem all that thrilled about Theo being out of the picture. Although Kyle and Theo sparred constantly, Kyle will acknowledge that they used to be friends once upon a time.

Even back then, they were always in a competition with each other. Kyle will note that the had safety net, but Theo didn’t.

Summer will counter that Theo cheated and Kyle’s not to blame for that. Still, Kyle will feel like it’s complicated since Theo used to be a pal and is now family. Soon after, The Young and the Restless spoilers say Theo will show up to turn in his security badge. He’ll guess Kyle’s celebrating with Summer, but Kyle won’t want to fight.

In a moment alone, Summer will give Theo a hard time about throwing away his shot and wanting everything Kyle had. Once Kyle returns, Theo will talk about suffocating at Jabot before Kyle wishes him well. Kyle will feel confident Theo will find success wherever he ends up.

In Kyle’s hotel suite, he’ll feel bad about letting Theo get under his skin. Kyle will battle regrets, but Summer will offer some encouraging words before they make love.

Back with Theo, he’ll give Lola Rosales (Sasha Calle) the firing news in a voicemail after trying and failing to reach her. Theo will confess that he’d like to hear one of Lola’s pep talks right about now, especially since it’s his birthday.