The Young and the Restless Spoilers: Amanda’s Trouble Grows – Friendships With Billy & Phyllis Lead To Disaster

BY hellodrdavis on January 21, 2020 | Comments: one comment
Related : Soap Opera, Spoiler, Television, The Young and the Restless 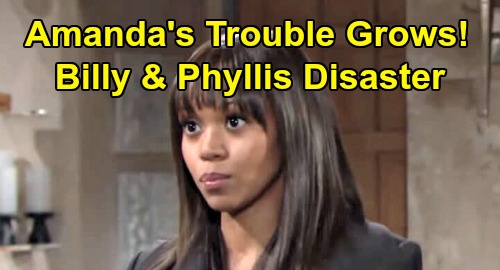 The Young and the Restless spoilers tease that Amanda Sinclair (Mishael Morgan) has been riddled with drama ever since she arrived in Genoa City. She showed up, apparently as the unwitting pawn of Colin Atkinson (Tristan Rogers) in his sinister plan to bilk Devon Hamilton (Bryton James) of his fortune.

That led to some serious hostility against her on Devon’s part, yet Amanda remained in town.

Of course, it has since been revealed that Amanda needed a new place to call home, since she seems to be running from a controlling and abusive ex. Her escape plan seems to be working thus far, as her ex hasn’t tracked her down yet.

And she’s seemed to be settling in fairly well in Genoa City, with an ally in Nate Hastings (Sean Dominic). At any rate, she hasn’t really burned any bridges yet, aside from the problems she had with Devon early on.

Well, that could soon be changing. As Y&R viewers know, a few weeks back, Amanda struck up an unlikely friendship with Billy Abbott (Jason Thompson). The two met in a dive bar outside of Genoa City, and they’ve been sharing drinks and conversation pretty regularly ever since.

While Billy and Amanda have declared to each other that they aren’t interesting in anything more than friendship, that seems pretty questionable.

In fact, when Billy confessed his friendship with Amanda to Victoria Newman (Amelia Heinle), she wasn’t happy about it at all. Victoria hit the roof and blasted Billy for talking with another woman rather than coming to her with his problems.

And something tells us that Victoria won’t be shy about confronting Amanda the next time they share the same airspace. In fact, we could see a real battle when Amanda and Victoria come face to face!

According to Y&R spoilers, Victoria may get an assist from her dad Victor Newman (Eric Braeden) when it comes to battling Amanda. Viewers will remember that Victor had an associate do a thorough background check on Amanda a while back, in order to assist Devon.

Victor will soon help Victoria by giving her some intel, so she might just go after Amanda with something that Victor dug up. We’ll see what happens there.

Of course, it’s also the case that Amanda has been hanging out with Phyllis Summers (Michelle Stafford), which is a move that could get her into trouble as well.

Since Phyllis seems to attract trouble and drama wherever she goes, it’s entirely possible that Amanda’s reputation could suffer further just from her association with Phyllis. It probably won’t be long before Phyllis pulls Amanda into some sort of situation.

At any rate, Amanda seems poised to have more problems come her way very soon. Of course, the worst thing that could happen for her at this point would be for her controlling ex to come back to town, which could certainly happen if, for example, Victoria decides to dig into her past and goes asking questions.

Do you think that Amanda will ultimately pay the price for her friendships with Billy and Phyllis? Stay tuned to the CBS soap and don’t forget to check CDL often for the latest Young and the Restless spoilers, updates, and news.