The Young and the Restless Spoilers: Billy & Amanda Land in Bed Together – Ripley Nightmare Pulls Them Closer, Friends to Lovers? 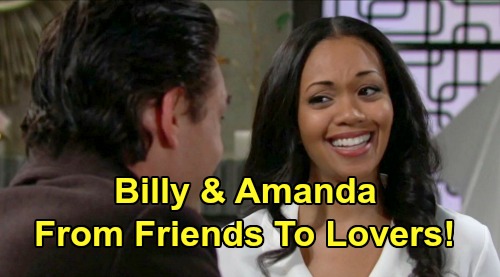 Victor Newman (Eric Braeden) will be especially outraged and will make it his mission to ensure Billy suffers. He’ll deliver a stern ultimatum, which could involve steering clear of Amanda or going to court over the kids. Then again, Victor might have some other fierce demand in mind. It may not really matter since Billy doesn’t listen to anyone at all these days.

Amanda and Billy will be at a crossroads in their relationship following this Ripley nightmare. Y&R fans can expect them to reevaluate their connection and what it truly means to them. They’ll have to decide whether what they’ve been through will drive them apart or pull them closer.

It’s possible Amanda and Billy will decide it’s best to part ways or at least stick with friendship. However, it seems like a shame to have all this buildup without going somewhere.

Amanda and Billy clearly get along well. They’ve talked about how they don’t have a lot in common, but they do in reality. They’re both people who have felt trapped and are now breaking free.

Although Billy’s wild side concerns Amanda in some ways, she finds it liberating in others. At his core, Amanda can tell that Billy’s a good guy and that’s what matters.

As for Billy, he finds Amanda incredibly easy to talk to and just be with in general. There’s a comfort level that just wasn’t present with Victoria, so Y&R may choose to keep heading down this road.

During the week of March 2-6, The Young and the Restless spoilers, updates and news say Billy and Amanda will take a closer look at their relationship. They’ll have to figure out what this connection actually is and what they want it to be moving forward.

Does that mean a hookup will finally happen? Will Billy and Amanda land in bed together? A kiss would be a nice start! Otherwise, Y&R fans will be left wondering what the point of all this was.