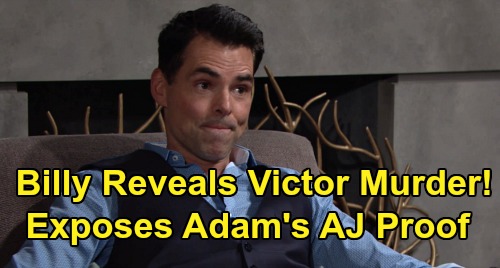 The Young and the Restless (Y&R) spoilers tease that Adam Newman (Mark Grossman) may lose control of his latest scheme. Y&R fans know Adam manipulated Alyssa Montalvo (Maria DiDomenico) into doing his dirty work. This crime reporter was able to get the goods on Victor Newman (Eric Braeden), so now Adam’s got all the evidence he needs to keep his father in line.

Adam thinks he’s in total control here, but that’s not going to be the case for long. The Young and the Restless spoilers say Adam will take over at Newman Enterprises again, which obviously won’t go over well with the other Newmans. Victoria will be particularly enraged, especially since Adam is threatening to expose their father’s crimes and send him to prison.

Adam’s got the story all ready to go if Victor crosses him. He told Alyssa that he had a stake in an online news outlet and could eliminate any obstacles. That was how Adam convinced Alyssa to dig for dirt, which led to proof that Victor murdered AJ Montalvo.

The Young and the Restless spoilers say Adam will assure Victoria that he can bury the story. It’ll never see the light of day as long as Adam gets what he wants – at least that’s what Adam will believe.

Of course, there’s the potential here for the story to get away from Adam. It could inadvertently fall out of Adam’s hands, and we have a pretty good idea of who’s hands it might fall into next.

As part of Victoria Newman’s (Amelia Heinle) healing process, she’s turning her back on Billy as anything more than a coparent. Victoria is essentially shutting Billy out of her life, which could be important, too. Billy now knows for sure there’s nothing to salvage. It’s not like Billy will hurt his relationship with Victoria when there’s no longer any relationship at all.

In other words, Billy won’t have anything to lose if he goes after the Newmans. Plus, it seems significant that Y&R put Billy in this Chancellor Media storyline. They invented a communications division out of the blue. Jill Abbott (Jess Walton) specifically mentioned that she wanted to keep the company relevant and be able to compete with Newman Enterprises.

Billy also brought up the possibility of throwing a splashy party recently, which Lily Winters (Christel Khalil) shut down. Lily argued that they needed a few more news outlets in their portfolio before they did anything like that.

What if Chancellor Media acquires the news outlet Adam has a stake in? Could Billy get wind of this buried story – perhaps through a frustrated Alyssa – and decide to pursue it?

The Young and the Restless spoilers say Billy will indeed be in hot pursuit during the week of April 13-17. Billy will stumble across a lead that needs chasing, so that certainly lines up.

It sounds like Billy may be the one to expose Victor’s crimes, which was never Adam’s goal. Adam just wanted to show Victor who’s boss, but he could be the reason Billy scores the scoop of a lifetime!

CDL will give you updates as this plot heats up. Do you think Billy will gain control of Adam’s story? Will Billy decide to run it and blow up Victor’s murderous secret? Stick with us for more scorching Young and the Restless spoilers, updates and news.