BY Heather Hughes on March 3, 2020 | Comments: one comment
Related : Soap Opera, Spoiler, Television, The Young and the Restless 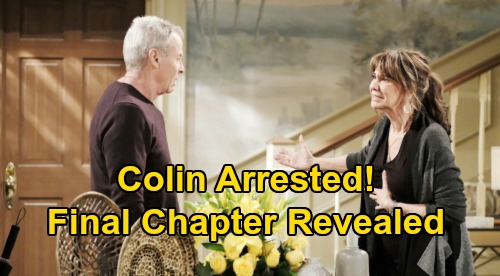 The Young and the Restless (Y&R) spoilers reveal that fans are going to get more closure than they anticipate. Many Y&R viewers were disappointed when Colin Atkinson (Tristan Rogers) simply gave Devon Hamilton (Bryton James) back his fortune – and there were some good reasons why.

For starters, it was such a lackluster ending to a lengthy storyline. Devon figured Colin was broke and alone now, so he just wanted to let him go. Seriously?! After all the drama Colin caused? It just didn’t seem right.

Plus, the idea of Colin suddenly having a heart and giving the money back seemed out of character. It just wasn’t a very Colin thing to do. Fortunately, new Young and the Restless spoilers say there’s one more chapter left in this messy will saga – and it’s one that won’t end well for Colin.

Here’s what we know so far. Y&R watchers can expect Colin to suck Jill back into his life – at least somewhat. That makes sense considering that rose delivery Jill got after Colin had been in touch. Even if Jill remains wary of trusting Colin throughout what’s ahead, she’ll still be close to the situation.

The Young and the Restless spoilers say another major betrayal’s coming up, so Jill will be livid with Colin. She’ll be a woman scorned for the umpteenth time, so she’ll certainly unleash her fury!

It turns out there’s more than meets the eye when it comes to the returned billions. Devon may think Colin made everything right, but that’s not the case.

Colin’s true plan should be revealed by the end of the month – and it involves a money laundering scheme. From the sound of things, Colin stole Devon’s fortune so he could launder it and keep up the lifestyle he wants.

Everyone’s off his back now, so he doesn’t have to worry about Chance Chancellor (Donny Boaz) or the feds catching up with him. It probably seemed like the perfect strategy to Colin.

However, the jig will soon be up according to the latest Young and the Restless updates and news. It looks like Colin will get arrested – although that could easily happen offscreen like it did with Ripley Turner (Christian Keyes). Y&R isn’t keen on doing major showdowns to wrap things up these days.

Still, it’s nice that The Young and the Restless writers intend to deliver a more satisfying ending. Colin deserves to pay for what he’s done, so let’s hope he remains in custody this time! He needs to land behind bars for his devious actions. We’ll deliver the latest news as other Y&R updates emerge, so don’t miss all CDL’s Young and the Restless spoilers.