The Young and the Restless Spoilers: Connor’s Dark Side Explodes, Young Adam’s AJ Murder Spells Trouble – Like Father, Like Son? 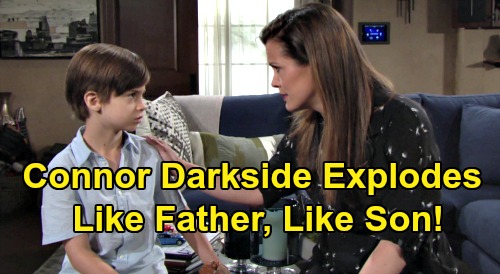 The Young and the Restless (Y&R) spoilers tease that Connor Newman’s (Judah Mackey) dark side could be unleashed. Y&R fans know Connor had a rough time thanks to a series of shocking events. Let’s run down the list of everything Connor’s been through and see what might be next for this troubled kid.

Connor was close to his stepdad, Calvin Boudreau (John Burke), who died suddenly during his trip to Genoa City. Soon after, Connor learned his biological father was alive and was happily reunited with Adam Newman (Mark Grossman).

Even so, moving to GC again was a big change. The fact that Chelsea refused to get back together with Adam certainly affected Connor, too.

Then, there was Victor Newman’s (Eric Braeden) fake death and Adam’s eventual decision to abandon Connor by returning to Vegas. Connor spiraled out of control until Adam finally came back in the picture.

Of course, there was also the hostage crisis at the Grand Phoenix. Connor’s definitely been through a lot over the last several months.

Later, Connor displayed some disturbing warning signs during his sessions with Sharon Newman (Sharon Case). Remember Connor’s weird chanting and evil glaring? It seemed like Y&R was going to head in a truly dark direction with Connor, but perhaps the story got scrapped for whatever reason.

This could be the perfect time for The Young and the Restless writers’ revive the “Dark Connor” angle. Since Adam murdered AJ Montalvo when he was younger, that could leave him concerned about his genes again. Adam and Chelsea Lawson (Melissa Claire Egan) had a conversation about this back in December.

Now that the real AJ murder story is out there, Adam may not be able to shield Connor from the truth. Connor might take his dad’s side in the matter, but Adam’s eventually going to blame himself for AJ’s death and so much more.

This could prompt some real soul-searching and convince Adam to stay away from Connor again – or at least cut down on the amount of time they spend together.

If this also leads to “Chadam’s” destruction, Connor could really lose it! The only reason the kid started doing better is because he got everything he wanted. “Can’t beat three…Mom and Dad and me,” as Connor once said in his creepy chant.

If Connor’s dream family is taken from him, he could display some dark tendencies just like his father. Adam might hope to protect Chelsea and Connor by staying away, but that only causes Connor to act out. It could be even worse this time since Connor’s had a taste of the perfect life he longed for.

The Young and the Restless spoilers say some Connor trouble could be brewing, so stay tuned to see what’s in store. As other Y&R news emerges, we’ll offer more updates. Do you think Connor could head down a dark path? Will Adam’s worst fear come true? Be sure to pop back in CDL frequently for terrific Young and the Restless spoilers, updates and news.