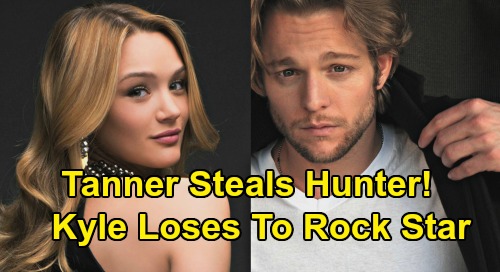 The Young and the Restless (Y&R) spoilers hint that the CBS soap may be making some big changes to their younger set. Over the past few months, we’ve already seen some major shifts in the storytelling. After a lengthy stint on the backburner, Mariah Copeland (Camryn Grimes) and Tessa Porter (Cait Fairbanks) were finally given some well-deserved airtime and a dramatic storyline.

Meanwhile, Lola Rosales’ (Sasha Calle) airtime dwindled after previously being at the center of the action. Theo Vanderway (Tyler Johnson) also started to fade to the background as Kyle Abbott (Michael Mealor) reunited with Summer Newman (Hunter King). Now that Theo and Lola seem to be on their way out, the core four to focus on are Summer, Kyle, Mariah and Tessa.

That’s a solid younger set of characters, but there’s one problem. We’ve got two happy couples and nobody to shake things up! Without Theo causing mischief, The Young and the Restless may have to bring somebody else into the mix.

There’s one person who might be perfect for that, especially since Y&R viewers have already gotten to know him.

The dude had some serious boundary issues, but he turned out to be a good guy in the end. Tanner set “Teriah’s” eventual reunion in motion, so he’s a rockstar sweetheart – and you really can’t go wrong with that!

Tanner’s biggest flaw is not wearing enough clothes, which is honestly pretty ideal for soaps. It’d be interesting for Tanner to land in Genoa City and stick around for a while.

It’s been established that Tanner is “Team Teriah” and never had a chance at reconnecting with Tessa. They’ve moved past all that, so it’d be cool for Mariah and Tessa to have another friend to interact with.

As for Summer and Kyle, could Tanner be just the guy to rock the boat? Tanner’s handsome, sweet, famous, charming, a goofball… The total package! Tanner isn’t a snake like Theo, so he’d be a more viable love interest and actual competition for Kyle.

Would Summer be tempted by Tanner? She might be – particularly if some issues emerge for Summer and Kyle down the road.

Although Tanner mentioned having a girlfriend, he also described her as “just regular” and suggested they learned to “make it work.” That doesn’t sound like a lasting love story. If Tanner were to show up single in GC, he’d be an option for Summer. There’d be a great love triangle opportunity to work with.

As for Tanner’s portrayer, Chase Coleman told Soap Opera Digest he’d love to have an extended stay at Y&R. “I would be 100 percent down for however long they would like to extend Tanner,” Coleman said.

The Young and the Restless will surely need someone to make a few waves for “Skyle,” so it might as well be someone we know. Since Tanner’s a megastar, perhaps he could face some massive scandal. Genoa City might be a good place to hide out while the dust settles – and an excellent place to find love!

Would you like to see Tanner Watts as another love interest option for Summer? Do you think Tanner could steal Summer from Kyle? As other Y&R news rolls in, we’ll pass along updates.