BY Heather Hughes on May 4, 2020 | Comments: Leave Comments
Related : Soap Opera, Spoiler, Television, The Young and the Restless 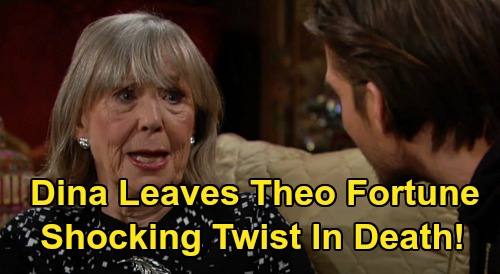 The Young and the Restless (Y&R) spoilers tease that Dina Mergeron’s (Marla Adams) life will ultimately come to an end. Y&R fans know Jack Abbott (Peter Bergman) decided to take a step back at Jabot for his mother’s sake. Ashley Abbott (Eileen Davidson) also came home to help Jack and Traci Abbott (Beth Maitland) as they prepare to say goodbye.

Dina returned to the Abbott mansion and is living out her final weeks with her family. This is clearly the last chapter of Dina’s story, but it could serve as a starting point for a new one. Let’s consider where Y&R might take this storyline next.

Theo Vanderway (Tyler Johnson) is a smug, smarmy character who’s always putting on a show. As Kyle Abbott’s (Michael Mealor) pointed out before, it’s all smoke and mirrors. He has this confident image he wants to project, so few people see the real Theo. Unfortunately, Theo just doesn’t let very many people in.

There are two exceptions though – and those exceptions are Dina and Lola Rosales (Sasha Calle). Let’s put Lola aside since we’re focusing on this Dina angle. Could there by a way for Y&R to play that up as Dina’s death hits hard?

Theo will certainly be affected by Dina’s demise, especially since he never really got the chance to know her. Despite not being able to communicate much, Theo and Dina do have an unspoken bond. If there’s ever a time when Theo’s a sympathetic character, it’s when he’s doting on Dina.

Dina’s death could be something that helps repair the damage between Theo and the Abbotts – at least at first. Jack was disappointed in Theo for stealing that old pitch and trying to pass it off as his own.

Kyle fired Theo with Jack’s approval, but no one came out a winner. Even Kyle battled regrets over losing a friend who’s now family.

Jack and Kyle might bond with Theo in the aftermath of Dina’s demise, but this is a soap. There’s always more drama around the corner! The Young and the Restless is also known to throw in newly invented information when it serves the plot.

Tessa Porter (Cait Fairbanks) needs a rock star ex-husband despite it not fitting in her history at all? Boom – she’s got one. Adam Newman (Mark Grossman) needs to be a boy killer who mistakenly blames his father? Here’s a deadly childhood secret that’s never come up before.

These are obviously just ways to keep the drama chugging along. Y&R writers have to come up with long-held secrets to make that happen. There’s another example we should mull over since The Young and the Restless may take a similar path with Dina and Theo.

Since Ashley isn’t an Abbott by blood, Dina decided to look out for her daughter. In a newly invented 2018 twist, it was revealed that Dina previously got John Abbott (Jerry Douglas) to draw up a legal document.

That legal document signed over all the patents to every product Ashley ever created at Jabot. It was a major shocker and an obvious rewrite.

Of course, Theo’s connection to Dina is a rewrite as well. Y&R wrote in another son for Dina that fans had never heard about. Dina gave Eric Vanderway (Jon Briddell) up for adoption and worried about him for many years based on her first interaction with Theo.

The Young and the Restless viewers will recall how Dina mistakenly thought Theo was Eric and teared up. Theo played along and gave Dina the reassurance she needed about Eric having a good life.

Since Dina looked out for Ashley, did she look out for Eric, too? Will some legal document surface – perhaps a will addendum that gives Eric the bulk of her estate out of guilt? A codicil could pop up and change everything.

Naturally, Dina’s fortune would go to Theo since his father is now dead. There’s been an awful lot of talk about how Kyle’s from a different world. It might be interesting to see Theo suddenly become part of that world, and it could happen with a massive inheritance.

This could also cause tons of friction with the Abbotts and give the story somewhere else to go. After Dina dies, do you think Theo could end up with her fortune?