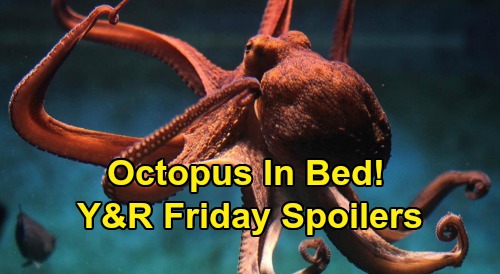 The Young and the Restless (Y&R) spoilers for Friday, April 24, tease that the week’s wrapping up with a classic episode from the Y&R vault. On Twitter, Lauralee Bell (Christine Williams) and Michelle Stafford (Phyllis Summers) made some at-home videos to promote this fun flashback show. The CBS soap actresses joked around about this 1996 episode, which contains some memorable scenes.

“Hey, remember when we went to Nevis?” Bell asked. “Well, I remember when you and Paul crashed my vacation,” Stafford replied. “Oh no! You crashed my honeymoon and put an octopus in my bed,” Bell insisted. They shared some laughs over the soapy moment and encouraged fans to tune in for Friday’s classic episode.

Y&R’s out of new content due to the COVID-19 aka coronavirus crisis, which forced the show to suspend production. Fortunately, there are plenty of encore episodes they can air to fill the void. The Young and the Restless spoilers say Friday’s show will indeed serve as a great blast from the past. We’ve got the scoop on what you can expect, so here’s a little recap of the action.

In Nevis, Phyllis is on vacation when she sees Christine and Paul Williams (Doug Davidson). She realizes they’ve chosen this as their honeymoon spot and insists Christine will be sorry. Phyllis opts to stick around since things could get interesting, so a plot is set in motion.

Phyllis eventually spies on Paul and Christine as they enjoy fruit on the beach. After Phyllis scores a room key from the maid, she sneaks in the newlyweds’ room while they’re showering. When Christine gets in bed, she’s horrified by what’s in the sheets with her. Christine’s screams alert Paul to trouble, so he rushes out and discovers the octopus Phyllis planted.

Phyllis is awfully pleased with herself following this wild scheme. The hotel manager promises Paul that there’ll be an investigation into the prank, but Paul and Christine don’t let it ruin their romantic time together. They decide to continue their honeymoon bliss despite this octopus hiccup.

Nick Newman (Joshua Morrow) stops by Newman Enterprises to see Victor and delivers news about his six-month anniversary with Sharon Newman (Sharon Case). They want to have a family celebration, and Victor’s on board with the idea. However, Victor notes that Nikki’s out of town and doesn’t get why Nick isn’t keen on postponing.

Over with Sharon, she pays a visit to her mother, Doris Collins (Karen Hensel). Sharon admits the real reason for this party, which is to announce that she’s having a baby with Nick. Despite Doris’ concerns, Sharon believes her marriage is going to be all right.

Heather Tom appears as Victoria Newman, who’s curious about Nick’s celebration and is having some issues in her own marriage. Victoria and Nick discuss Victor as well as Nikki briefly, but Nick’s mind is clearly on other things. Afterward, Sharon stops by to see Victoria and assures her this party is to show the family they’re standing together. Victoria doesn’t quite seem to buy that as the reason.