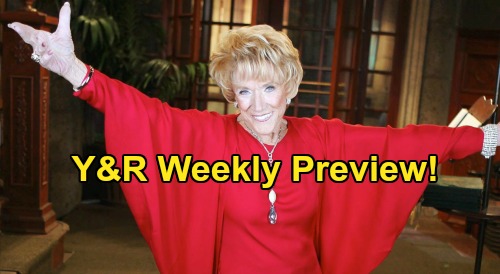 The Young and the Restless (Y&R) spoilers reveal that the CBS soap is set to kick off a special week of episodes – and they’re all about a very beloved Genoa City resident! During the week of April 27-May 1, Y&R will deliver a tribute to the late Jeanne Cooper. Of course, Cooper brought Katherine Chancellor to life for many years and certainly deserves to have some of her greatest moments highlighted.

The show intends to do just that since new episodes officially run out on Thursday, April 23. Y&R doesn’t have any more fresh content since the COVID-19 aka coronavirus crisis shut down the studio.

The cast and crew haven’t been able to get back on set for filming, so The Young and the Restless is getting creative about how they’ll fill the airtime.

As part of a fun strategy to keep fans interested, Y&R’s set to deliver theme weeks. They’ll release info on future themes at a later date, but we’ve got the scoop on the first one. As we mentioned, the week of April 27-May 1 will be all about Katherine Chancellor – GC’s longtime matriarch who always lit up the screen.

The Young and the Restless viewers will be treated to some terrific encore episodes, including some that go all the way back to 1990. Y&R’s calling this “Katherine the Great” week, so you’ll definitely want to tune in if you were a Katherine fan.

If you’re a newer Y&R watcher, here’s your chance to see a glimpse of the show’s history and get to know the Katherine so many characters have talked about.

Of course, there’ll be one episode in between when new content runs out on April 23 and this April 27 “Katherine the Great” kickoff. The Young and the Restless spoilers say Paul and Christine Williams’ (Lauralee Bell) 1996 honeymoon will be featured on Friday, April 24. That’ll wrap up the classic Friday series before the theme weeks begin.

As other news comes in on future themes, we’ll deliver the latest updates. Are you looking forward to “Katherine the Great” week? Don’t forget to drop by CDL again soon for the hottest Young and the Restless spoilers, updates and news.