BY hellodrdavis on May 21, 2020 | Comments: Leave Comments
Related : Soap Opera, Spoiler, Television, The Young and the Restless 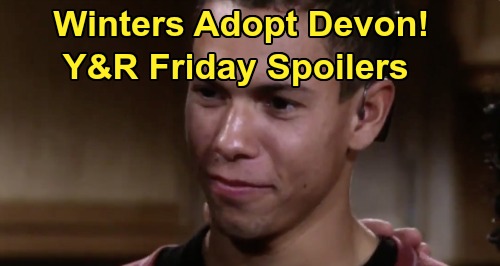 The Young and the Restless spoilers for Friday, May 22, tease that fans will see an encore episode that originally aired on December 7, 2006. Ashley Abbott Carlton (Eileen Davidson) and Jack Abbott (Peter Bergman) will be furious upon learning that Gloria Abbott (Judith Chapman) is planning a television appearance representing the Abbott name.

Ashely will invite Gloria to a meeting, where she and Jack will implore Gloria not to go on the show representing the Abbotts. Gloria will balk at their concerns, saying that it’s just too bad because she’s going on the show anyway. Later, Ashley and Jack will decide that they have to do something, so they’ll come up with a plan to keep Gloria off of that show.

Meanwhile, Michael Baldwin (Christian LeBlanc) will tell Lauren Baldwin (Tracey E. Bregman) that Paul Williams (Doug Davidson) removed himself from the investigation into Carmen Mesta’s (Marisa Ramirez) murder. This will surprise Lauren. Soon, Gloria will arrive and inform Michael and Lauren about her plans to appear on television to represent the Abbotts.

Later, Amber Moore (Adrienne Frantz) will arrive, and she and Lauren will head to the boutique. There, Lauren will introduce Amber to Jill Abbott (Jess Walton), Katherine Chancellor (Jeanne Cooper), and Esther Valentine (Kate Linder).

Next, Drucilla Winters (Victoria Rowell) and Sharon Newman (Sharon Case) will catch up. Drucilla will explain that she and Neil Winters (Kristoff St. John) are planning to adopt Devon Hamilton (Bryton James). Michael will call Drucilla shortly, saying that the family court judge is ready to talk with Neil, Drucilla, and Devon about the adoption matter.

Once at the courthouse, the judge will want to talk with Devon. The judge will ask Devon how his biological parents would react to the news of his adoption. Devon will say that his biological mother is using drugs again, but that she loves him and wants what’s best for him.

Devon will tell the judge that he considers Drucilla and Neil to be his parents, and the judge will agree that the adoption can proceed.

The Winters family will want to celebrate, and they’ll invite Sharon, Lauren, and Michael to accompany them to Gina’s. Michael will need to take Fenmore “Fen” Baldwin (Amiel and Avital Weiss) home first, and once he arrives home, Lauren will be relieved to see them, since she couldn’t get hold of Michael earlier.

Michael will tell Lauren about Drucilla and Neil’s adoption of Devon, as well as their invitation to celebrate the great news. Lauren will decline, saying that she wants to stay home.

Gloria, who will also be present, will hold Fen so Lauren can rest. Soon, the doorbell will ring, and Gloria will get served with papers – it will be a restraining order preventing Gloria from appearing on the TV show as an Abbott.

Meanwhile, while out having dinner with Jill and Esther, Katherine will reassure Jill that no matter what, they’ll always be mother and daughter. Esther will spot a well-known psychic also dining at the restaurant, and she’ll introduce herself to the psychic.

In the course of their conversation the psychic will tell Katherine that she needs some new shoes, and she’ll turn to Jill saying that Jill should watch out for a woman going after her man. Later, Katherine will break a heel.

Over with Paul, he’ll tell JT Hellstrom (Thad Luckinbill) that he has removed himself off of Carmen’s murder case because of his association with Brad Carlton (Don Diamont). Paul will feel pretty certain that Devon isn’t the murderer, and Paul and JT will decide that they’ll keep investigating the murder together.

Finally, Professor Adrian Korbel (Eyal Podell) will conclude his meeting with Colleen Carlton (Adrianne Leon), but later Colleen will see Professor Korbel flirting with a bartender when she’s out with JT. JT will think that Colleen should leave it alone, but Colleen will be really put off Professor Korbel’s actions, and she’ll keep watching him.

It sounds like we’re in for a great encore episode on Friday! Keep watching the CBS soap and be sure to keep CDL at the ready for all your soap updates and news. We’ll keep you up to speed on the Young and the Restless, so stick with us!