The Young and the Restless Spoilers: Is Alyssa Montalvo Setting Billy Up – Wants Revenge On Adam AND Former Publisher? 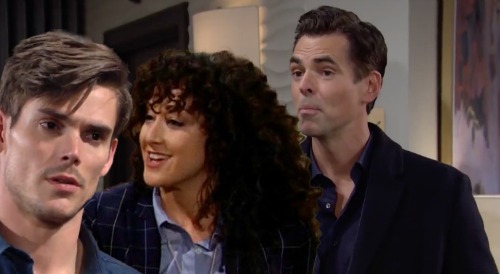 Since Billy has every motive to have tried to shoot Adam Newman (Mark Grossman), this was significant evidence.

During the week of November 23, Rey will get another piece of the puzzle – the gun used in the shooting will be found in the dumpster behind the Chancellor Communications building, and it will be registered to Billy.

Of course, Billy is going to categorically deny being the shooter, although it will be just as if someone handed Rey and Paul Williams (Doug Davidson) the perfect evidence pointing to Billy.

But we suspect that Rey might think that the case is coming together a little too perfectly.

After all, Billy is a smart, calculating guy, and if he were to try to kill Adam, he probably wouldn’t be careless enough to leave one of his earbuds at the crime scene, and he certainly wouldn’t dump his gun in a dumpster behind his own office building. Something just doesn’t add up here.

In fact, if Rey’s smart, the question in this investigation may quickly go from looking at Billy as the main suspect to looking for someone who would have reason to both want Adam dead and to want to take Billy down, too.

Or maybe it would be someone who hates Adam and has special access to the Chancellor Communications building…someone like Alyssa Montalvo (Maria DiDomenico).

Y&R viewers haven’t seen Alyssa since shortly before the exposé on Adam was published. Alyssa was the investigative reporter with a major vendetta against Adam, since Adam killed her father AJ Montalvo back in the day.

That would certainly give Alyssa motive to want Adam dead under the best of circumstances, and Alyssa might be pretty peeved right now about how the exposé was received by the public.

We have to remember that while the exposé was a huge financial success for Chancellor Communications and Billy, Alyssa may be feeling like the exposé didn’t ultimately accomplish what it was supposed to accomplish.

After all, the authorities investigated Adam and Chance Chancellor’s (Justin Gaston) dealings in Las Vegas but ruled that there was insufficient evidence to file any charged. That might have left Alyssa furious.

Alyssa might be feeling like Billy overpromised what the exposé would deliver, and she might have decided to kill two birds with one stone by shooting Adam and framing Billy for the crime.

Alyssa would know that Billy would be a natural suspect, given that Adam killed Billy’s daughter Delia Abbott (Sophie Pollono). It would be the perfect setup for Alyssa.

Hopefully, Rey and Paul will give the matter some serious thought as they’re investigating and putting the pieces together.

Alyssa certainly has motive to want to take down both Adam and Billy, and she could still have access to the Chancellor Communications building to swipe Billy’s earbud and his gun, if Billy keeps his gun there.

We’ll see how this all shapes out, but Billy being responsible for Adam’s shooting just seems too convenient and easy. Do you think that Rey and Paul will look elsewhere for suspects, and possibly in the direction of Alyssa?

Stay tuned to the CBS soap and remember to keep CDL bookmarked for easy access to all of our Young and the Restless spoilers, updates, and news.