BY Heather Hughes on May 5, 2020 | Comments: Leave Comments
Related : COVID-19 NEWS, Soap Opera, Spoiler, Television, The Young and the Restless 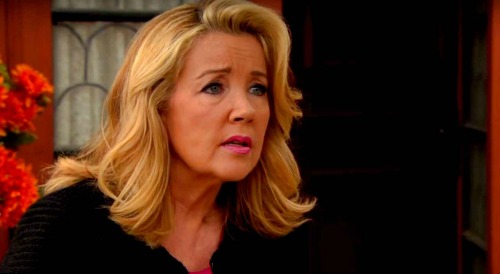 The Young and the Restless (Y&R) spoilers reveal that Melody Thomas Scott (Nikki Newman) recently answered some great fan questions on Twitter. Y&R’s account is working to keep fans engaged with the classic episodes that are airing, so Scott did her part to help out. After Young and the Restless viewers sent in their tweets, Scott responded to many of them – including some about when Y&R will return!

Scott addressed the show’s production suspension due to COVID-19 aka the coronavirus. This pandemic has kept the cast and crew at home, which is why fans are seeing encore episodes now. That’s what Y&R will have to air until production resumes and they can make new ones.

Plenty of viewers are enjoying these blasts from the past, but we’re all still eager to see what’s next for Victor Newman (Eric Braeden), Adam Newman (Mark Grossman), Sharon Newman (Sharon Case) and all your other GC favorites.

When will The Young and the Restless be up and running again? How long will it take for new episodes to air once they return to set? These are burning questions for many people out there, so Scott touched on the subject in a couple of tweets.

“This is Day 54 for us in quarantine,” Scott said. “We have not heard when we will be shooting new episodes. So much is unknown. The lead time for airing new episodes may be different, so I don’t want to set anything in stone. We’d like nothing better than to go back to work.”

In another tweet, Scott echoed that idea when she was once again asked about making new episodes. “We have no idea,” Scott said. “Haven’t heard about when we will resume.” Of course, the best thing fans can do is be patient and keep supporting this fantastic genre! The Young and the Restless will be back sooner or later, so we can all look forward to when that day finally arrives.

For now, Y&R viewers can catch up on the wild moments in these encore episodes. The show’s been selecting some exciting shows, so stay tuned! We’ll keep you in the loop on all the latest news and updates.

.This is Day 54 for us in quarantine. We have not heard when we will be shooting new episodes. So much is unknown. The lead time for airing new episodes may be different, so I don’t want to set anything in stone. We’d like nothing better than to go back to work.❤️❤️❤️ https://t.co/NzKK17ujzW