BY Heather Hughes on April 2, 2020 | Comments: one comment
Related : Soap Opera, Spoiler, Television, The Young and the Restless 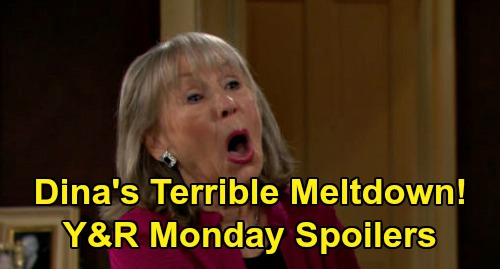 The Young and the Restless (Y&R) spoilers for Monday, April 6, tease that the tension’s about to explode. Before we get to all the action, we should note that Y&R will air an encore episode on Friday, April 3. They’ll jump right back into the current storylines with a new show on Monday, so let’s talk about what’s in store.

For starters, Dina Mergeron (Marla Adams) will have an upsetting day. Y&R spoilers say Theo Vanderway (Tyler Johnson) will drop by the Abbott mansion with Lola Rosales (Sasha Calle), which Kyle Abbott (Michael Mealor) won’t approve of. There’s obviously still a lot of conflict between them when it comes to Lola and pretty much everything else in their lives.

Kyle will believe this is all part of Theo’s plan to show Lola his good side – not that Kyle thinks Theo has one! However, Theo will insist he belongs there as much as Kyle does. Lola will look unnerved as their argument heats up. Moments later, Dina will confuse the dueling cousins for John Abbott and Stuart Brooks. She’ll probably assume they’re fighting over her, which should add to her distress.

After Jack Abbott (Peter Bergman) intervenes, he’ll probably make sure Dina’s led upstairs for some quiet time. Then, it’ll be time to deal with the boys! The Young and the Restless spoilers say Jack will rip into Theo and Kyle for letting their feud affect Dina. He already hated their bickering, but now he’ll think they’ve really gone too far.

Once Jack hears the whole story, he’ll feel like Kyle provoked Theo. Jack will look betrayed as he indicates his deep disappointment in Kyle. Since Theo and Kyle can’t get along, a special boardroom meeting will be called later in the week. Kyle will be awfully nervous about that, but at least he’ll have Summer Newman (Hunter King) to back him up.

In the meantime, Jill Abbott (Jess Walton) will try to make peace with someone. Colin Atkinson (Tristan Rogers) was recently captured, so this might tie in with that. Perhaps Jill will reach out to Amanda Sinclair (Mishael Morgan) and let her know she’s sorry for all the drama.

It isn’t Jill’s fault Amanda got dragged into this, but Jill may apologize just the same. Whatever the case, Jill will be on a mission, so let’s hope she pulls off her goal. As for Amanda, she’ll feel a growing spark with Nate Hastings (Sean Dominic). Once their first date gets underway, Nate will take Amanda out for a night on the town and make her feel special.

Y&R spoilers say Faith will be in denial when she hears the news. She’ll feel like maybe there’s another type of drugs Sharon could use, but Sharon will insist they have to move on. Since this is so serious, Sharon won’t want to downplay anything. She’ll admit she’s scared about possibly losing her breast, but they’ll all just take this one step at a time.

Afterward, it looks like Mariah will let her emotions pour out during a conversation with Tessa Porter (Cait Fairbanks). Tessa will indeed return home in the week ahead, so that’ll probably be due to a phone call from Mariah. Since Mariah could use some support in person, Tessa will soon be right by her side.