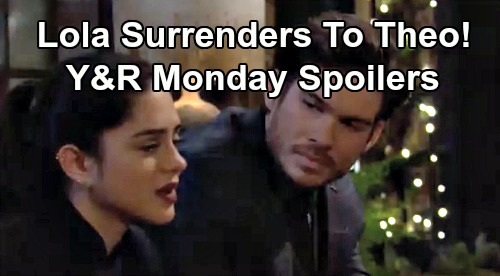 The Young and the Restless (Y&R) spoilers for Monday, February 10, tease that life will go on for Kyle Abbott (Michael Mealor) and Lola Abbott (Sasha Calle). Their marriage may be over, but they’ll still have to head to work as usual. Of course, Lola and Kyle may have very different perspectives as they start the day.

Kyle was a bit down in the dumps after their split, but he didn’t let that stop him from sleeping with Summer Newman (Hunter King). It’s clear that Kyle just couldn’t hold back his passion. Meanwhile, Mariah Copeland (Camryn Grimes) gave Lola comfort and a warning about never being with Theo Vanderway (Tyler Johnson) – a warning Lola’s certainly not going to heed.

Lola will share her own passionate moment with Theo soon, but let’s set the stage first. As Lola begins her shift at Society, she’ll undoubtedly be glum about her imminent divorce. Lola feels free in some ways, but she also hates that it had to turn out like this.

Kyle is dealing with a lot of the same feelings, but he’s dealing with intense feelings for Summer, too. The Young and the Restless spoilers say they’ll both be riding high after that hot hookup – and Theo will notice. He’ll quickly realize they’re basking in the afterglow, so he’ll needle Summer until she admits it.

However, Summer will push Theo’s buttons right back. She’ll argue that Lola deserves better than a guy like him, which will leave Theo fuming. Theo is no prize, but why should Summer decide who Lola dates? She just stole Lola’s husband essentially, so she doesn’t need to be sabotaging Lola’s prospective new romance.

Naturally, Theo will use all this to his advantage and prove Summer right. Lola really does deserve someone better, but she admittedly likes the bit of bad in him. Theo’s bad side will be on full display when he lets the “Skyle” hookup secret “slip.” He’ll pretend it’s inadvertent, but he’ll know exactly what he’s doing.

Lola’s heart will sink when she realizes Kyle couldn’t even wait 24 hours to get in bed with his ex. It’ll be crystal clear to her that Kyle’s completely moved on. Lola will resolve to move on just as fast, so she’ll pull Theo into a steamy kiss.

It may be partly a move in retaliation, but Theo won’t care. He’ll thoroughly enjoy locking lips with Lola, and she’ll likely feel the same way.

The Young and the Restless spoilers are still off in some cases due to recent preemptions, but it looks like Adam Newman (Mark Grossman) will tackle unfinished business on Monday.

This likely involves the big problem in Vegas. Adam will want to pay Riza Thomas (Tina Casciani) a visit and hash some things out, but he’ll hope to leave Chance Chancellor (Donny Boaz) in the dark.