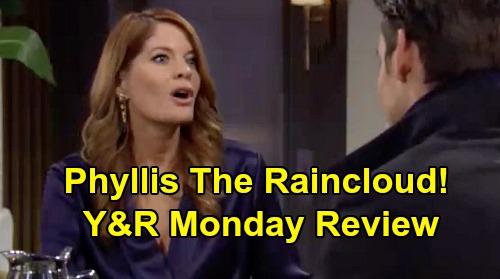 The Young and the Restless spoilers review for Monday, February 17, tease that Abby Newman (Melissa Ordway) will catch up with Chance Chancellor (Donny Boaz) in his room at the Grand Phoenix.

The two will make love and talk a bit about Las Vegas, which Chance will want to leave in the past. Abby will understand, and soon talk will turn to the Newman 50th anniversary gala. Chance will agree to be Abby’s date for the event.

Downstairs in the lobby, Phyllis Summers (Michelle Stafford) will be listening to her recording of Adam Newman (Mark Grossman) and Chance in Las Vegas when Adam walks in.

Phyllis will toy with him, telling him he’s busted and that whatever happens in Vegas “dies” in Vegas. She’ll note that she’s “dead” serious and that she has “grand” plans, and she’ll allude to how Chelsea Lawson (Melissa Claire Egan) would do anything for him, He’ll look worried by the end of the exchange.

She’ll tell Kyle and Summer that she doesn’t want to spend another minute angry and that she’s moving forward and leaving the past where it belongs. Kyle and Summer will be stunned into silence.

Over at Society, Chloe Mitchell (Elizabeth Hendrickson) and Chelsea will enjoy a meal together. They’ll talk about Chelsea’s Paris trip and when she mentions that Adam has been out of town, Chloe will get suspicious and warn Chelsea that he’s probably up to no good – even “murder and mayhem.” Chelsea will shut her down.

Before long, Theo Vanderway (Tyler Johnson) will spot the pair and will send drinks their way. They’ll giggle over his “bad boy” status and Chloe will reveal her pregnant belly to him across the room, causing more giggling. They’ll be glad that they’re both in relationships and don’t have to deal with guys like Theo anymore.

Next, on the new episode of Y&R on Monday, February 17, Devon Hamilton (Bryton James) and Elena Dawson (Brytni Sarpy) will canoodle at the penthouse, when they’re interrupted by a knock on the door.

It will be Chance, arriving with news about Colin Atkinson (Tristan Rogers), who was just tracked by the feds and then lost in Buenos Aires. Devon will be bummed that Colin was lost again, but Chance will insist that the noose is tightening.

Back at the Grand Phoenix, Abby will catch up with Lola, and they’ll discuss Lola’s trip to Miami and her breakup with Kyle. Abby will be worried that Lola will be moving back to Miami, but Lola will say that she’s staying in Genoa City.

Lola will say that she wants to open her own restaurant in Miami, but that she can do that while remaining at Society. Abby will be thrilled, and she’ll say that Lola is an amazing woman.

Once Lola leaves, Chance will meet back up with Abby, and the two will be canoodling when Phyllis approaches and needles them about being such a cute couple. As they’re walking away, she’ll blurt out that she hopes the rumors aren’t true, clearly designed to get a rise out of Chance.

Phyllis will then say that she heard that some guests might be suing the hotel over the Simon Black (Jeffrey Vincent Parise) incident. Once Abby and Chance leave, Phyllis will spot Chloe and Chelsea returning from their meal at Society. Phyllis will ask Chloe if she can have a word with Chelsea.

Chelsea will say she’s not interested when Phyllis says that she has a proposition for her. Phyllis will they say, “You should be interested unless you want Adam going to prison.”

Back at the penthouse, Adam will encounter Devon and Elena by the elevators. Devon will innocently ask if they’ll be seeing Adam at Victor Newman’s (Eric Braeden) party later, and Adam will sarcastically say, “All the more people to have a chance to kiss his ring.”

Devon will blast Adam for dissing his father, noting that he’d love to still have Neil Winters (Kristoff St. John) in his life.

Meanwhile, at Jabot, Summer and Kyle will have some difficulty concentrating on their work, and Summer will wonder how Lola can really be ok with them being together.

Kyle will say that Lola is an incredible woman, and that there will be no more hiding or tiptoeing for them – now is their time. They’ll decide to head to Victor’s party together, despite the looks they might get.

Finally, Lola will arrive at Society with a look of resolve in her eye. Theo will immediately spot her and greet her as she walks in. He’ll welcome her back and wonder how she’s doing.

Lola will say that she’s good, and that what she really wants to do right now is cook. Theo will watch her as she walks into the kitchen.

There’s definitely a lot of Y&R drama coming up on Monday’s episode, so be sure to stay tuned to the CBS soap. And check back with CDL regularly for the latest Young and the Restless recaps, spoilers, and news.