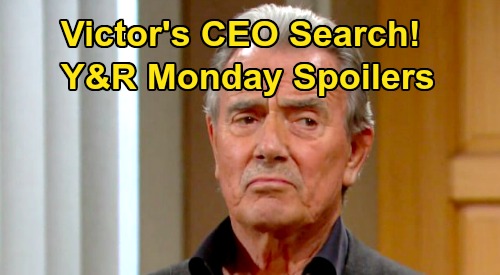 The Young and the Restless (Y&R) spoilers for Monday, February 24, tease that Sharon Newman (Sharon Case) will take control. She’ll feel the need to step up and handle something herself, so it’ll be interesting to see what that is. Sharon’s been struggling a bit as a result of her cancer diagnosis, but she’s doing remarkably well under the circumstances.

Although Sharon’s scared about what the future holds, she’s not letting it hinder her life. Sharon intends to keep putting one foot in front of the other. She appreciates all the love and support she’s received, but she doesn’t like it when her loved ones hover. It’s all about balance for Sharon, so that may be why she feels the need to take charge.

Of course, this could also have something to do with the refurbishments at Crimson Lights. If a crisis arises, Sharon may prefer to handle it herself rather than delegating. No matter what Sharon’s dealing with on Monday, she’ll prove she’s got plenty of fight left in her. That goes for this cancer battle and for life in general!

Meanwhile, Y&R spoilers say Victor Newman (Eric Braeden) will pull the family together. He’ll think now’s the time to prove how strong the Newmans are. Victoria will remain in a medically induced coma, but there’ll be things to do while she’s out of commission.

As the news continues to spread, there could be some PR stuff to tackle. Victoria is the CEO of Newman Enterprises and was stabbed at a gala to honor the company as well as her father. That’s a huge deal, so Victor may have to put out some fires. He’ll also have to think about who’ll be at the helm while Victoria recovers.

Victor might come out of retirement initially, but Y&R spoilers say he’ll give Nick Newman (Joshua Morrow) a challenge during the week of March 2-6. Other Young and the Restless updates point to Nick eventually taking the throne.

Naturally, what’s most important is Victoria’s well-being and making sure she doesn’t have to worry about anything once she awakens.

There are also some loose ends dangling when it comes to Ripley Turner (Christian Keyes) and Billy Abbott (Jason Thompson). Victor may call in reinforcements to make sure Ripley’s apprehended. As for Billy, we have no doubt that Victor’s got a plan to handle him, too!