The Young and the Restless Spoilers Next 2 Weeks: Stormy Night Spells Trouble and Hookups for GC – Sharon’s Cancer Worsens 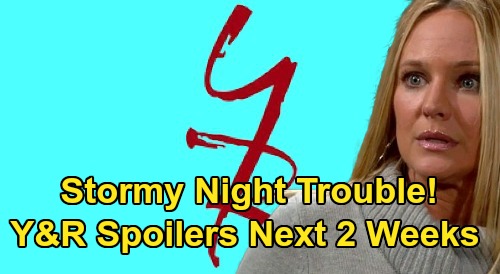 The Young and the Restless (Y&R) spoilers for the next two weeks, March 2 to March 13, tease that several Genoa City residents will land in tight spots. During the week of March 2-6, Victor Newman (Eric Braeden) will have to hand over the Newman reins to someone. He’d like for that someone to be Nick Newman (Joshua Morrow), but Adam Newman’s (Mark Grossman) the only one interested so far.

Nevertheless, it looks like Victor will ultimately get his wish. After Nick feels the pressure, it appears he’ll indeed take Victoria Newman’s (Amelia Heinle) place for the time being. Over with Mariah Copeland (Camryn Grimes), she’ll battle plenty of regrets. Mariah will hook up with Lindsay (Kirby Bliss Blanton) just before Tessa shows up at the apartment.

A stunned Tessa will struggle to wrap her head around this, but it’ll be obvious that Mariah has betrayed her. This certainly isn’t what Tessa expected to come home to, so she won’t stick around long. After Tessa heads back out on tour, Mariah’s world will come crashing down. She’ll eventually open up to Sharon Newman (Sharon Case) about the major blow she just delivered.

Sharon will probably feel like Tessa needs time and space to cool off. Tessa isn’t leaving Y&R and good things are headed “Teriah’s” way down the road, but it’ll all seem pretty hopeless for Mariah in this moment. Mariah will fear she’s lost the love of her life, so her heartache should take a toll.

Next, an ice storm will trap several different clusters of characters. Nick and Phyllis Summers (Michelle Stafford) will battle temptation when the roads get too bad for Phyllis to leave. They’ll cozy up to the fire, so we’ll see if things heat up in more ways than one! A “Phick” hookup is certainly possible.

Over with Michael Baldwin (Christian LeBlanc) and Lauren Baldwin (Tracey E. Bregman), they’ll make the most of their time riding out the ice storm. Lauren and Michael have some steamy scenes coming up.

Other Young and the Restless spoilers say Jack Abbott (Peter Bergman) will catch up with Ashley Abbott (Eileen Davidson). He summoned her since the end may be near for Dina Mergeron (Marla Adams), but Ashley will also take care of some unfinished business during this trip. Jack will be part of that, so it’ll be interesting to see what these siblings have in mind.

It looks like Kyle Abbott (Michael Mealor) could wind up stick in Theo Vanderway’s (Tyler Johnson) during that ice storm. They’ll have an arm wrestling match at Society, so it sounds like a different kind of battle for these cousins. We’ll see if they can sort through some of their issues.

Across town, Nate Hastings (Sean Dominic) and Elena Dawson (Brytni Sarpy) will work together to help Jared (Michael Maclane), a man in need. Devon Hamilton (Bryton James) will eventually become part of a project Nate and Elena are working on, so this will presumably involve New Hope. Y&R spoilers say Devon will eventually make a confession, which could catch Elena and Nate off guard.

Chance Chancellor (Donny Boaz) will heat things up in the shower with Abby Newman (Melissa Ordway), but he won’t forget about his mission to bring down Phyllis.

As for Billy Abbott (Jason Thompson), he’ll face a bit of an emotional roller coaster when it comes to Amanda Sinclair (Mishael Morgan). Amanda will push Billy away after Ripley Turner’s (Christian Keyes) next thwarted murder attempt and arrest.

However, Billy may end up with Amanda during that ice storm. He’ll console Amanda, which will lead to them taking a closer look at their connection. During the week of March 9-13, Billy will make some bold moves. He’ll take risks, so we’ll see if those involve Amanda or some other wild adventure of his.

Victor Newman (Eric Braeden) will also make a serious power play later, which could cause quite a stir in Genoa City. If Nick isn’t already on the throne at that point, he should be soon after.

Of course, this could also mean Victor will attack Chancellor Industries or something along those lines. Now that Jill Abbott’s (Jess Walton) back and mentioning the company more, it seems like it’ll be important.

The Young and the Restless spoilers, updates and news say Jill will put a secret plot in motion, so she’s definitely got some tricks up her sleeve. Finally, Nikki Newman (Melody Thomas Scott) will offer more support to Sharon Newman (Sharon Case). They’ll strengthen their bond as Sharon’s cancer fight gets tougher.

The next two weeks should bring loads of hot drama, so Y&R fans will want to tune in. As other updates and news become available, CDL will have all the latest Young and the Restless spoilers for you.