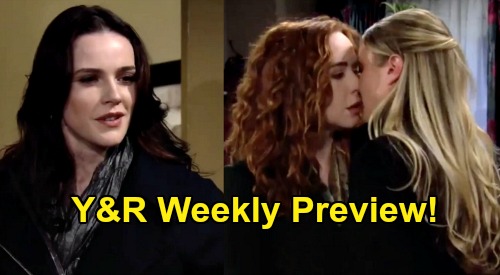 The Young and the Restless (Y&R) spoilers for the week of March 2-6 tease that some shockers are on the way. Y&R’s weekly preview video promises that some relationships will heat up while others cool down. First, let’s talk about one couple moving in a positive direction. Abby Newman (Melissa Ordway) and Chance Chancellor (Donny Boaz) just can’t seem to get enough of each other.

Chance will work on his mission to destroy Phyllis Summers’ (Michelle Stafford) leverage in the week ahead, but he’ll make time for Abby. The Young and the Restless’ promo shows Abby saying, “You’re gonna want to take off those clothes.” It won’t be long until Abby and Chance strip down for some shower steaminess, so this couple definitely belongs in the heat-up category.

Tanner Watts’ (Chase Coleman) also has some boundary issues, but Tessa isn’t cheating with him. Before Tessa left, she assured Mariah that she never knew what love was until she found her. The only reason Tessa even agreed to this tour was because of the strength of their relationship. Tessa insisted nothing could break them, but Y&R’s going to put them to the test.

The Young and the Restless spoilers say Mariah will cave under the weight of everything she’s dealing with. She’ll end up sleeping with Lindsay (Kirby Bliss Blanton) before Tessa catches them on the sofa. One moment of weakness will blow Mariah’s life up in a big way!

Let’s really think about this for a second. Mariah and Tessa got the slowest of slow burns, which has given them one of the deepest love stories on the show. It’s been building since back in 2017. This isn’t a couple that was thrown together in a few months or broke up over a purse as a Christmas gift.

“Teriah” has overcome real-deal problems and they’ve only ever truly had eyes for each other. Tessa has made plenty of mistakes, but cheating isn’t one of them. She’ll be crushed and furious over Mariah’s betrayal, but what can Mariah really say? Tessa might lash out at Mariah briefly, but she’ll mostly be eager to get out of there. She’ll probably leave Mariah wondering exactly where they stand.

It looks like Mariah will talk to Lindsay about what a massive mistake their hookup was. She’ll wonder how Tessa can ever trust her again, so it’s good that Y&R’s revisiting this trust theme. Mariah has struggled to trust Tessa throughout their relationship, but now it’s Mariah’s turn to face the other side of that. She’ll be the one feeling guilty and groveling.

Later, Mariah won’t be able to hold in her emotions during a conversation with Sharon. She’ll hate to unload on Sharon during her cancer crisis, but she won’t know what else to do. Y&R’s weekly preview shows a weepy Mariah saying, “My life is one enormous dumpster fire…and I lit the match.”

Mariah is definitely responsible for this mess, but don’t underestimate the compassion she’s shown Tessa after her own screwups. The Young and the Restless spoilers, updates and news suggest Tessa will forgive eventually, but it’ll be a long road to get there!

It sounds like some exciting drama’s coming up on the CBS soap. Don’t forget to stop by CDL often for all the hottest Young and the Restless spoilers! We’ll offer the latest updates as more news comes in.

This week!!! Trouble ahead!!! 😳 #YR pic.twitter.com/WRbTwFhfsB