BY Heather Hughes on January 12, 2020 | Comments: one comment
Related : Soap Opera, Spoiler, Television, The Young and the Restless 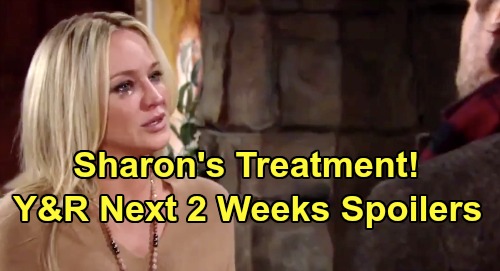 The Young and the Restless (Y&R) spoilers for the next two weeks tease that some hot drama’s ahead in Genoa City. During the week of January 13-17, Sharon Newman’s (Sharon Case) biopsy will reveal that she’s got breast cancer. She’ll get emotional as she ultimately breaks down to Rey Rosales (Jordi Vilasuso), who’ll support Sharon through the next steps.

Rey will go with Sharon to her oncologist appointment, where she’ll learn what kind of treatment might be best for her. Sharon will ask if she can beat this and will be given hope. She loves her family too much to throw in the towel here, so she’ll definitely resolve to win this battle.

Meanwhile, Victoria Newman (Amelia Heinle) will need Nikki Newman’s (Melody Thomas Scott) guidance. After discovering a dive bar receipt, Victoria will be perplexed. She won’t get why Billy was there since it’s not his usual kind of place and happens to be far off the beaten path.

Billy will fib about a client meeting there, but Victoria will see through his deception. When she reveals her concerns to Nikki, Victoria will be advised to ask for the truth. Billy will eventually give Victoria that, but she may not believe his side of the story. Although Billy and Amanda Sinclair’s (Mishael Morgan) bond is platonic so far, it should be weird to Victoria that he feels the need to sneak around.

Other Young and the Restless spoilers say Theo Vanderway (Tyler Johnson) will take a punch to the face. He’ll go too far in his pursuit of Lola Abbott (Sasha Calle), so Kyle Abbott (Michael Mealor) will let his fists do the talking.

Over with Phyllis Summers (Michelle Stafford), he’ll flirt with “Chance” Chancellor (Donny Boaz) and hope she can lower his guard. Chance may not think it’s working, but Phyllis may be sneakier than he gives her credit for.

Back with Billy, he’ll turn to Lily Winters (Christel Khalil) and hope she can offer some advice. That should tie in with Amanda, so we’ll see what Lily has to say.

Next, Tessa Porter (Cait Fairbanks) will get in touch with Mariah Copeland (Camryn Grimes) and pass along some exciting news. Y&R fans know Tessa just headed off on tour with Tanner Watts (Chase Coleman), so she may already have an interesting story or two from the road.

Later, Mariah will face a tough blow along with Nick Newman (Joshua Morrow) and Faith Newman (Alyvia Alyn Lind). They’ll all get updates on Sharon’s diagnosis, so they’ll rally around her and offer support during this difficult time.

Since Tessa just left, Mariah may be hesitant to fill her in on Sharon’s cancer. She might fear it would either distract Tessa if she continues the tour or pull her away from her dream if she bails. Mariah won’t like her options here, but she’ll have to figure out the best way to handle this.

During the week of January 20-24, some Tessa and Tanner scenes are coming up. It seems like some fans aren’t accepting this for whatever reason, but Tessa didn’t exit the show and will still be seen onscreen. Chase Coleman performed a song to score the part, so we should hear music from Tanner at some point. A new plane set will also debut, so this is a legitimate storyline.

Back in Genoa City, Billy will do something daring. Could he move beyond platonic territory with Amanda? That’s one possibility to consider. Regardless, Billy will be feeling bold and that could lead to trouble.

Other Young and the Restless spoilers say Adam Newman (Mark Grossman) and Chelsea Lawson (Melissa Claire Egan) will take their relationship public. They may face a little backlash from certain GC residents, but it’ll be nice for them to be open about their love.

Over with Kyle, he’ll share his feelings with Jack Abbott (Peter Bergman) – most likely about his issues with Theo. Kyle will also head out on a road trip with Summer Newman (Hunter King), which could bring them closer and make things more complicated. It sounds like a business trip will bring a big adventure.