The Young and the Restless Spoilers: Nick Proposes to Phyllis, Caught Up in Passion – Engagement Brings Summer Freak-Out? 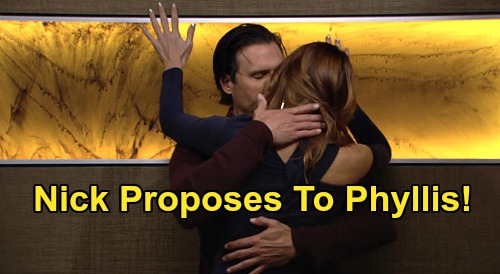 The Young and the Restless (Y&R) spoilers tease that Phyllis Summers (Michelle Stafford) and Nick Newman (Joshua Morrow) will continue to heat things up. Nick and Phyllis certainly have no problems in the passion department! They’re really feeling the fire right now, which could put them in a dangerous frame of mind.

Passion can often cloud judgment, so that could be the case for Nick and Phyllis as they move forward. Although they’ve both been burned before, their doubts are starting to melt away – particularly Nick’s. He’s been doing his best to help Phyllis overcome her own as well, so they seem to have reached a place of acceptance and understanding.

Nick and Phyllis are truly all in on this “Phick” reunion. Resisting it is futile since they can’t stay away from each other at this point. Things tend to escalate quickly for Phyllis and Nick – at evidenced by how fast they went from friends to hookup buddies to true lovers.

Now they’re on board with a real future again, so Nick and Phyllis could be headed for trouble.

Will all this passion fuel Nick’s desire to propose? It wouldn’t be out of the question based on how crazy they are about each other. If Nick wants a way to show his full commitment to Phyllis, this might be a way for him to do it.

Of course, Nick might face some resistance since Phyllis is just now letting her guard down. Phyllis won’t want to let Nick in too much, too fast. She might think that’s a recipe for disaster and heartbreak. The Young and the Restless spoilers suggest Phyllis may have more moments of doubt despite her love for Nick.

However, Nick’s the kind of guy who always knows just the right thing to say. Nick could easily win Phyllis over on the idea of marriage, especially if he assures her they can have a lengthy engagement.

Even so, Y&R fans know the news of this engagement would cause some freak-outs – especially from Summer Newman (Hunter King) and Nick’s family.

Summer’s already been concerned about her parents setting themselves up for another round of pain. Although Summer’s stopped nagging Nick and Phyllis, this would give her another reason to flip out. It’s one thing to slowly date again. It’s quite another to jump into an engagement and start planning a wedding.

Summer might argue that Phyllis and Nick are behaving like out-of-control teenagers. She’d feel like they’re letting passion drive their bad decisions. Plenty of Nick’s other loved ones would agree with Summer on that. The Newmans would definitely be against this marriage, but it’d be Nick’s presumably terrible choice to make!

The Young and the Restless spoilers say some shockers and shakeups are coming up in Genoa City. As other Y&R details come in, we’ll give you all the hottest updates.

Do you think Nick will propose to Phyllis sooner than he planned? It’d be fun to watch Summer and the rest of the Newmans freak! CDL’s your go-to source for great Young and the Restless spoilers, updates and news.