The Young and the Restless Spoilers: Phyllis Falls for Rey After ‘Phick’ Breakup – Sharon Back with Nick, Partner Swap Shocker?

BY Heather Hughes on May 1, 2020 | Comments: Leave Comments
Related : Soap Opera, Spoiler, Television, The Young and the Restless 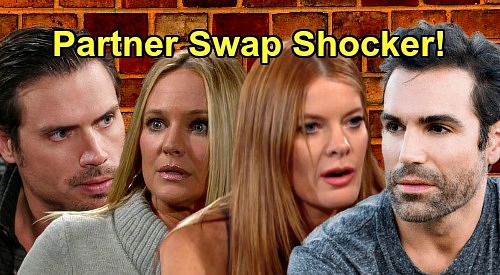 The Young and the Restless (Y&R) spoilers tease that we should start thinking about what the future holds for some current couples. There could be major romantic shakeups brewing at Y&R, so let’s consider where things stand and where they might go from here.

For starters, it’s important to remember that one breakup often leads to another. If you’re going to make two characters single again, they’re going to need new people to be paired up with. Splitting up another duo is an easy solution.

With that in mind, we should mull over two happy couples that may be doomed. First, there’s Phyllis Summers (Michelle Stafford) and Nick Newman (Joshua Morrow).

In an interview with Soap Opera Digest, Morrow himself said this “Phick” reunion isn’t going to last – and he knows his character better than anyone! Nick and Phyllis bring the heat, but they always crash and burn in the end.

Of course, Sharon Newman (Sharon Case) and Rey Rosales (Jordi Vilasuso) have the opposite problem. They arguably don’t bring much heat at all! In fact, it’s very easy to imagine Rey and Sharon living in boring bliss for the rest of their lives. That’s exactly why it won’t happen. This is a soap, and we have to have some drama.

Sharon and Rey have been wrapped up in this cancer story, so it’s understandable that revving up the romance isn’t the priority – although Rey has still managed to sweep Sharon off her feet on occasion. However, this dull “Shey” dilemma isn’t a new issue. Rey and Sharon lost their luster after the forbidden element was removed from the equation.

Back when Sharon was keeping her role in the J.T. Hellstrom (Thad Luckinbill) mess a secret, Rey was the lead detective on the case. Sharon worked right across from Rey and faced the tough task of keeping this news from him every day – all while battling her growing feelings.

It was juicy! You could feel that forbidden tension because Sharon knew she shouldn’t, but she was clearly falling in love.

Without the J.T. secret or Mia Rosales (Noemi Gonzalez) to stir the pot, Rey and Sharon’s love story has fallen flat. It’s seemingly made a breakup inevitable. If Nick and Phyllis are going headed for Splitsville along with Sharon and Rey, could we see a partner swap down the road? It’s an intriguing option to ponder.

Nick and Sharon are a proven soap supercouple. They certainly have their issues, but the chemistry’s there and so is the fan support. Y&R would have great success with a “Shick” reunion. What about Rey and Phyllis? Could you get behind them as a pairing?

Many Young and the Restless viewers tend to complain about the same old couples getting back together. Phyllis and Rey would be a brand-new offering, so that’s appealing. It might be worth giving these two a shot. Phyllis could spice up Rey’s life, but maybe he’d be a calming influence. They could balance each other out!

How would you feel about a Y&R partner swap? Will Phyllis fall for Rey if a Sharon and Nick reunion happens? As other details emerge, we’ll give you updates.