BY hellodrdavis on March 30, 2020 | Comments: 2 comments
Related : Soap Opera, Spoiler, Television, The Young and the Restless 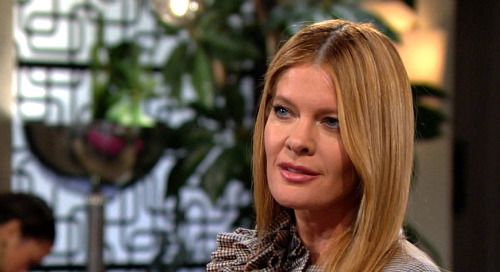 The Young and the Restless spoilers tease that Phyllis Summers (Michelle Stafford) might let Nick Newman (Joshua Morrow) in on a secret. As Y&R viewers know, Phyllis has known for a while now about Adam Newman’s (Mark Grossman) Vegas crime. Adam was responsible for a man’s death, and even though it was in self-defense, he’s afraid that the authorities won’t see it that way, especially since he and Chance Chancellor (Donny Boaz) apparently got rid of the body.

Well, Phyllis has been sitting on this information, and she used it to get Chelsea Lawson (Melissa Claire Egan) to fork over her shares of the Grand Phoenix. Phyllis has been wanting to keep the secret in her pocket to use at a later date against Adam and/or Chance, but could that day be approaching?

After all, Phyllis has recently cozied up to Nick, and the two are now involved in a full-fledged relationship. Whether or not they want to admit it, their fling seems to be going beyond a few hookups here and there, and Phyllis could find herself in the position of wanting to help Nick out and demolish Adam all in one fell swoop.

Let’s think for a moment about what Adam has been up to lately. He’s been digging up dirt on Victor Newman (Eric Braeden) over the death of a childhood friend’s father that he thinks Victor is responsible for. According to Y&R spoilers, Adam will soon attempt to blackmail Victor with this dirt, to strong-arm Victor into giving him the CEO spot at Newman Enterprises.

It’s likely that Victor will tell Nick about what’s going on, and Nick may want to find a way to help neutralize Adam’s threat to Victor. That could lead Nick to commiserate with Phyllis, who could in turn offer her help. She could tell Nick that she’s got her hands on that recording of Adam and Chance admitting to killing a guy in Vegas.

Now that would be something that Nick would be interested in dangling in front of Adam, to get him to back off of Victor. That is, Nick could threaten to go public with the recording of Adam if Adam goes public with Victor’s Kansas dealings/crime.

This would all be well and good for Nick, but there might be a problem here – and that’s that Phyllis doesn’t yet know that the recording of Adam and Chance talking in Vegas has been stolen from her safe deposit box! As Y&R viewers will remember, Abby Newman (Melissa Ordway) impersonated Phyllis and took the recording from the safe deposit box.

So, if and when Phyllis ever goes back to the safe deposit box, she’s going to find the recording gone…and this could happen AFTER she promises the recording to Nick. This could really mess things up for Phyllis and Nick and could even threaten their burgeoning relationship.

We’ll see what happens here, but at some point, Phyllis is going to have to find out that her copy of Adam and Chance’s Vegas conversation is missing from the safe deposit box, and we have a feeling that will happen when she needs the recording the most.

Do you think that Phyllis will offer to let Nick have the Vegas recording so he can neutralize Adam? Stick with Y&R for all the action, and remember that CDL is your place for all your soap spoilers, recaps, and news. We’ll let you know as we get more sizzling Young and the Restless updates!