BY Heather Hughes on March 30, 2020 | Comments: one comment
Related : Soap Opera, Spoiler, Television, The Young and the Restless 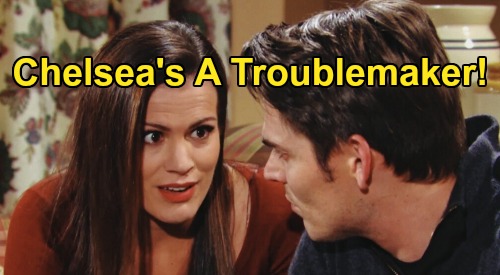 The Young and the Restless (Y&R) spoilers for Tuesday, March 31, tease that Phyllis Summers (Michelle Stafford) will become a target. Abby Newman (Melissa Ordway) and Chance Chancellor (Donny Boaz) will apparently be back from their recent trip, but they’ll find some new trouble to get into right away.

Of course, whenever there’s trouble in Genoa City, Phyllis is usually involved somehow! In this case, it’ll be through no fault of her own. An unsuspecting Phyllis will become Chance and Abby’s victim – at least if they have anything to say about it! Although it’s never a good idea to underestimate Phyllis, Abby and Chance will have at least one advantage this time around.

Phyllis is falling head over heels for Nick Newman (Joshua Morrow) again, so she’s clearly a bit distracted at the moment. That could give Chance and Abby an opportunity to plot against Phyllis and have her never see it coming.

Naturally, Abby probably won’t be able to resist taking a few good jabs at her nemesis, but that may not raise any red flags. That’s become a normal day for Abby and Phyllis.

In fact, Phyllis would be suspicious if Abby tried to play it cool and be nice! Abby’s best bet is to keep raking her enemy over the coals and take whatever Phyllis’ dishes out, too. With Chance’s help, The Young and the Restless spoilers say Abby can keep scheming behind Phyllis’ back and drop a vengeful bomb on her when the time’s right.

Speaking of vengeful bombs, Adam Newman (Mark Grossman) has one in mind for his father. Victor Newman (Eric Braeden) has become a target as well – and Adam’s on the verge of scoring major evidence thanks to Alyssa Montalvo (Maria DiDomenico).

In the meantime, The Young and the Restless spoilers say Chelsea Lawson (Melissa Claire Egan) will enjoy being a pot-stirrer. Will that relate to Adam’s plans? It’s possible Chelsea will mess with someone like Nick Newman (Joshua Morrow) or Nikki Newman (Melody Thomas Scott) on Tuesday.

Chelsea already pushed Nick to accept that Adam just wants peace – all while knowing he was plotting. Perhaps Chelsea will once again play dumb about Adam’s scheme with a Newman family member or supporter.

There’s also a chance Chelsea will stir the pot with Phyllis. They traded barbs after the ice storm when Phyllis not-so-subtly pointed out that she spent the night at Nick’s place. Phyllis obviously wanted Nick’s ex to know, so Chelsea may decide to needle Phyllis about her revived romance.

Whatever the case, Y&R fans can expect a shocker for Chelsea down the road. It’s all fun and games now, but Chelsea will have to step up for Adam after his plans go awry. As other updates emerge, don’t miss our exciting Y&R news. CDL will have plenty more Young and the Restless spoilers, news and updates posts to deliver.