The Young and the Restless Spoilers: Phyllis Reaches End Of The Road – Destroyed When Old & New Misdeeds Exposed? 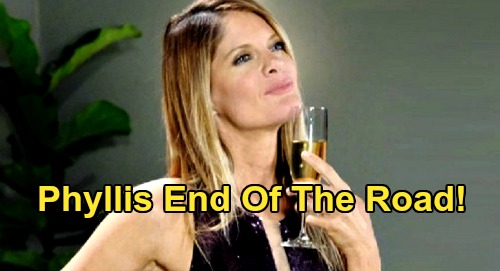 The Young and the Restless spoilers document that Phyllis Summers (Michelle Stafford) has two particular misdeeds that are hidden in her character’s closet. The potential exposure of one, or both would be earth-shaking, impact many lives and surely alter Phyllis’ personal comeback.

Phyllis’ plan remains the same. She wants to gain respect in Genoa City, Wisconsin. She wants to do so through her business efforts and in reestablishing the Phick relationship. But both efforts could be fully derailed if her criminal activities are revealed.

Stafford rejoined the cast of Y&R last year. She departed the show in 2013, with Gina Tognoni (Phyllis) assuming the role in 2014 and remaining as that edition of Red into 2019.

Tognoni was given scripts that allowed her specific talents to shine. It was smart of the executive producers and the writing staffs to have allowed a more vulnerable Phyllis to flow during this actor’s solid reign.

Stafford’s return clearly reset the character back on her original course, meaning that Phyllis would return to who she once was.

Christine Williams (Lauralee Bell), long known by her nickname, Cricket, or by Phyllis’ derisive tag, the Bug, knows that Stafford’s character intentionally ran her and Paul Williams (Doug Davidson) down many years ago. Davidson’s character realizes that as well, but chose to move past what happened. Cricket didn’t.

As viewers recall, Christine voluntarily stepped away from her role as GC’s District Attorney last year. That’s left her time to focus on other aspects of life.

It would be most fitting if Chris pursues, or fortunately happens upon unknown evidence, or some overheard admission, that helps her to nail Phyllis. If that happens, Abby Newman (Melissa Ordway) could purchase the Grand Phoenix at a bargain basement price.

Nick Newman (Joshua Morrow) has convinced himself to trust Phyllis again. That major lapse in judgment might not last long if the full truth about Phyllis’ orchestrated efforts Las Vegas, Nevada, is known.

Assume Nick learns the full contents of Phyllis’ secretly recorded conversation between Adam Newman (Mark Grossman) and Chance Chancellor (Donny Boaz). As Chief of Police, Paul could enter the storyline from this angle.

Morrow’s character is aching to see his little brother face justice. Contacting Paul about Adam’s accidental killing admission could quickly lead to Phyllis being charged for not reporting what she knew to the authorities. That’s the spark that could short circuit the just realized Phick reboot.