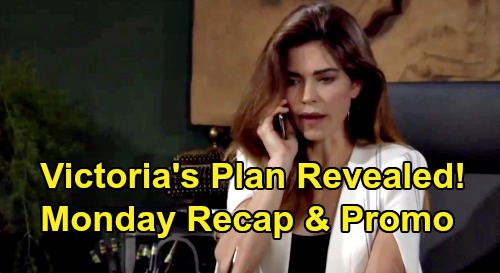 The Young and the Restless spoilers recap for Monday, August 17, tease that Adam Newman (Mark Grossman) will stay behind as Chelsea Lawson (Melissa Claire Egan) heads off to the ranch to pick up Connor Newman (Judah Mackey).

At the ranch, Chelsea will chat with Victor Newman (Eric Braeden) about how Adam’s doing. Chelsea will say that Adam is pretty overwhelmed right now, and she and Victor will be on the same page thinking that Adam should move forward instead of looking back.

Meanwhile, Adam will head over to Sharon Newman’s (Sharon Case) house, where he’ll be greeted by Rey Rosales (Jordi Vilasuso). Rey will reluctantly leave them to chat at Sharon’s insistence, and Sharon will apologize for Nick Newman’s (Joshua Morrow) behavior yesterday.

Adam will get up to speed on Sharon’s cancer and her status, and he’ll be shocked to realize that her battle has been going on for a while.

Sharon will want to talk about what’s going on with Adam, and he’ll eventually open up to her about how he can’t remember causing AJ Montalvo’s death as an 11-year-old boy, and about how Chelsea is of the opinion that he’s better off not remembering the incident.

Adam will ask Sharon for her opinion, and she’ll think that he’ll be at unrest until he gets his memories back. Sharon will suggest some trial sessions to unearth his repressed memories, and Adam will agree, thinking it’s best not to tell Chelsea about their sessions.

Sharon will disagree, saying that Chelsea needs to be told on account of their history.

At the Grand Phoenix, Phyllis Summers (Michelle Stafford) and Abby Newman (Melissa Ordway) will bicker over the bones that Phyllis planted at Abby’s hotel property across the street.

Phyllis will seemingly have the upper hand, but Abby will say that she’s just going to wait for Phyllis to self-destruct, then she’ll enjoy taking everything over. Phyllis will mention something about a new venture, but she won’t elaborate.

Later, Chance Chancellor (Donny Boaz) will arrive to see Abby, and after some conversation, Abby will realize that Chance is worried about Adam since Adam’s no longer CEO at Newman Enterprises.

Across town at Crimson Lights, Rey will meet up with Nick, and they’ll discuss how Adam is meeting with Sharon right now. Rey and Nick won’t like it one bit, and they’ll begrudgingly acknowledge that Sharon’s got a big heart and will want to help Adam.

Over at Newman Enterprises, Jack Abbott (Peter Bergman) will arrive after being summoned by Victoria Newman (Amelia Heinle) for some important reason – Jack will be intrigued.

Jack will wonder what’s going on with all of the CEO changes at the company, but Victoria won’t cough up any information. Instead, Victoria will have a plan to run by Jack. After hearing the plan, Jack will be very impressed and totally on board.

Victoria will be glad to hear that Jack wants to be in on the mutually beneficial arrangement, and she’ll say that she wants to announce her return to the CEO spot in a big way.

Back at the Grand Phoenix, Nick will arrive, and he and Phyllis will head upstairs for some quality time together. In their room, Abby and Chance will discuss Adam, as Chance unsuccessfully tries to get hold of Adam. Chance will explain that Adam saved his life, and that he’ll be there as a fried to him.

Abby will think that the man that Chance knew back in Las Vegas no longer exists and that he’s turned right back into the same old Adam. But Abby will say that she understands that Chance needs to reach out to his friend.

Back at Adam and Chelsea’s penthouse, Adam will approach Chelsea with the news that he went to see Sharon, and that he asked Sharon to help him recover his repressed memories.

Chelsea will think that it will be one of the biggest mistakes that Adam will ever make. Finally, Rey will return back to Sharon’s home and Sharon will say that they need to discuss her earlier conversation with Adam.

It sounds like a lot of Y&R drama is heating up for Monday’s episode, so stay tuned! We’ll be sure to give you updates as Y&R news comes in. Stick with the CBS soap and don’t forget to keep CDL bookmarked for the latest Young and the Restless spoilers, updates, and news.

Next week on #YR, Chelsea finds out that Adam asked Sharon for help, and the Newmans prepare for a potential war. pic.twitter.com/e5vbUD5Yw8