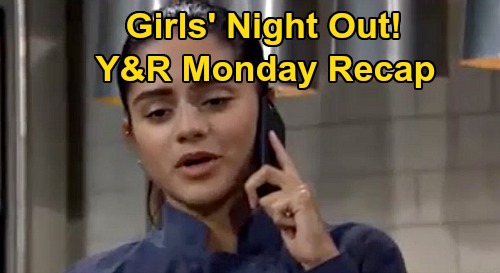 The Young and the Restless spoilers recap for Monday, September 28, tease that Amanda Sinclair (Mishael Morgan) will speak with Mariah Copeland (Camryn Grimes) at Crimson Lights.

Mariah will catch Amanda watching old episodes of GC Buzz on her phone, and she’ll be miffed. Amanda will then tell Mariah that she found out she’s Hilary Hamilton’s (Mishael Morgan) twin.

Mariah will soften a bit and she’ll agree to tell Amanda about Hilary. Mariah will recount various interactions she had with Hilary, including when Hilary verbally abused and tripped her.

Mariah will say that she and Hilary fought, but that they eventually became friends, and Mariah will remember her final conversation with Hilary from her hospital bed.

Mariah will ask how Amanda and Hilary got separated, and Amanda will say that she’s trying to piece that together. Mariah will tell Amanda that whatever she finds, she shouldn’t beat herself up, and that she might consider talking with the person who gave Hilary her first break in Genoa City.

In Chancellor Park, Elena Dawson (Brytni Sarpy) and Devon Hamilton (Bryton James) will meet, and Devon will have a picnic all set up for Elena. Elena will think that Devon’s feeling guilty about spending time with Amanda, and Devon will eventually admit that it’s true.

Devon and Elena will have a nice time together, talking about their work and kissing lovingly.

At Jabot, Kyle Abbott (Michael Mealor) and Summer Newman (Hunter King) will chat about telling Jack Abbott (Peter Bergman) about their engagement. Jack will enter and wonder what they’re talking about, and Kyle will cover, saying that he’ll talk with him later.

Kyle will go, and Summer will turn the tables on Jack, saying that he needs to find love, too.

Later, Amanda will meet with Jack with some questions about Hilary. Jack will explain that he met Hilary when she was about to leave town, and he’ll remember the interaction vividly.

Jack will explain that he and Hilary became friends, and he’ll say that Hilary was a solid, controlled, professional who was tough but vulnerable.

At Society, Lola Rosales (Sasha Calle) will flash back to overhearing Summer and Kyle talk about their engagement, then she’ll call Mariah in to talk. Mariah will enter the kitchen a short time later to see Lola, and she’ll learn about Lola dumping Theo Vanderway (Tyler Johnson).

Lola will say that she wants a fresh start and needs to move forward.

Later, Mariah will be at the bar when Kyle comes in to check on Lola. Mariah will tell Kyle that Lola went to the farmer’s market, and through their conversation, Mariah will let it slip that Lola and Theo broke up.

Kyle will say that he’ll always worry about Lola, then he’ll go, and Lola will emerge from the kitchen. Mariah will decide that Lola needs a girls’ night out, and Lola will reluctantly agree.

Kyle will head back to Jabot, where he’ll happily tell Jack about his engagement to Summer. Jack’s face will fall, and he and Kyle will immediately start to argue. Jack will want to know what’s the rush, and he’ll point out that Kyle and Lola are still married.

Kyle will refer to that as a small obstacle, and Jack will fire back that his lawyer probably doesn’t consider that to be small. Jack will think that Kyle ought to show some restraint and patience. Kyle will be miffed.

At the Grand Phoenix, Amanda will arrive to see Phyllis Summers (Michelle Stafford). Amanda will share that she and Hilary are sisters, and Phyllis will sit down with Amanda to talk about Hilary.

Phyllis will start telling Amanda about Hilary, but Amanda will seem overwhelmed, and Phyllis will say that they need to talk about Amanda, not Hilary.

Amanda will start crying, and she’ll think that there was a sense of sadness in Hilary that she could have helped with. Phyllis will tell Amanda not to go down the “what if” route or compare herself to Hilary. “You’re not one half of a whole – you’re incredible, Amanda,” Phyllis will say.

Later, Amanda will go up to her suite and watch more episodes of GC Buzz on her phone, while over at Devon’s place, he and Elena will listen to music and make love.

It sounds like a lot of Y&R drama is heating up for Monday’s episode, so stay tuned! Here at CDL, we’ll give you updates as more Y&R news comes in. You can count on us for all the latest Young and the Restless spoilers, updates, and news.

Next week on #YR, Traci finds answers about Dina, Victoria visits Victor at the ranch, and Billy makes a bold move. pic.twitter.com/I4EaTw4ksC