The Young and the Restless Spoilers: Rey Gives Sharon a Wedding to Look Forward To – Proposal Offers Hope After Cancer? 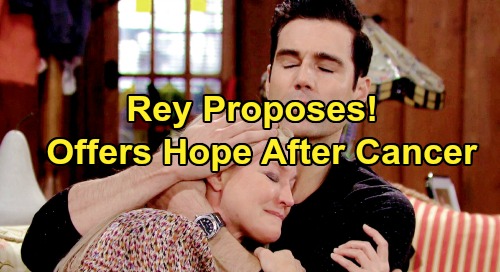 The Young and the Restless (Y&R) spoilers tease that Sharon Newman (Sharon Case) will grow increasingly concerned as her surgery draws near. Y&R fans know Sharon’s been struggling over her latest scan results, which revealed that the chemo hadn’t worked well enough to be helpful. Sharon has to move on now, so her surgery will happen sooner than planned – and it could be more invasive.

Of course, Sharon doesn’t know just how invasive yet. Whether Sharon has a lumpectomy or a mastectomy, she’s certainly nervous about what the future holds. Rey Rosales (Jordi Vilasuso) has done his best to convince Sharon she’ll get through this, but he’s clearly worried as well.

As Rey pointed out in his recent chat with Lola Rosales (Sasha Calle), he just doesn’t know what he’d do without Sharon. The idea of Sharon dying is something that Rey doesn’t even want to think about, but there’s no doubt that he’s mulled it over.

Nevertheless, The Young and the Restless spoilers say Rey will stay strong for Sharon’s sake. What Sharon needs is for Rey to be her rock and give her some hope. Could Rey decide to make a bold move as part of his efforts?

Rey’s been helping Sharon with positive-thinking techniques and doing everything he can to make her look to a brighter future. Could Rey give Sharon a wedding to look forward to as well? Sharon’s bound to be incredibly nervous before her surgery, but Rey should be as optimistic as ever.

If Sharon has to have a mastectomy, she may be self-conscious and worry Rey won’t see her the same way. That obviously wouldn’t be the case and Rey would be sure to say so. It’s easy to imagine a tender moment where Rey insists he wants to marry Sharon when this is all over.

Rey probably wouldn’t want to pressure Sharon with an official proposal, so he might choose a gentle way of popping the question. Just a promise that Rey will get down on one knee and do it up right when the time comes! Anything that’d help Sharon imagine life beyond her cancer would be a good thing.

Even if Rey waits until after Sharon’s procedure, a proposal seems likely down the road. Sharon and Rey deserve it after going through all this together! As other updates emerge, CDL will deliver all the latest Y&R news.