The Young and the Restless Spoilers: Sparks Fly for Billy and Amanda – Hotel Room Temptation Explodes 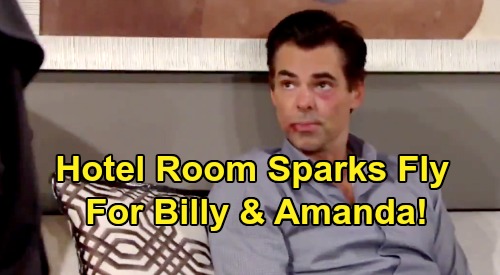 The Young and the Restless (Y&R) spoilers tease that Billy Abbott (Jason Thompson) and Amanda Sinclair (Mishael Morgan) may battle temptation. Amanda has made it clear that she’s got serious trust issues thanks to her abusive ex-fiancé, Ripley Turner (Christian Keyes). She’s not looking for a romantic relationship right now, so her friendship with Billy has worked out well so far.

However, that won’t be the case for much longer. Amanda will cut ties with Billy since this bond of theirs is so weird. She won’t think it’s healthy, especially since it’s adding to Billy’s issues with Victoria Newman (Amelia Heinle).

Victoria and Billy can’t agree on what’s best for Billy, which is why they’ll ultimately split during the week of January 27-31.

After Billy packs a bag and heads out, he’ll find himself in a troubling situation. One way or another, Billy will get on someone’s bad side and take a beating for it. Billy will have a run-in with some other guy’s fists, so it looks like Amanda will take pity on him.

If Billy faces this beating because of Amanda or to defend her honor somehow, that’d certainly add to Amanda’s compassion.

Regardless, it seems Billy will seek refuge in Amanda’s suite at the Grand Phoenix. He’ll fill Amanda in on his relationship’s destruction and assure her she’s not to blame. Billy will simply feel like he’s a different person now. He wants to feel free and alive, not bogged down by his past mistakes.

Of course, we’d be remiss to ignore the location of Amanda and Billy’s chat. Again, this will take place in a suite. Y&R fans know what can happen in those!

Sparks tend to fly – just like they will when Summer Newman (Hunter King) kisses Kyle Abbott (Michael Mealor) on January 27. That’s just the kind of thing that happens when two soap characters are alone in a hotel room.

Will Billy and Amanda share a kiss, too? Could they even take it a step further and hit the sheets? Despite Amanda’s attempt to set boundaries, she’s clearly drawn to Billy. Sometimes passion erupts and you just can’t help it.

Billy also seems to be kidding himself about how he truly feels. There’s a real connection between Billy and Amanda that neither one of them can deny. The Young and the Restless spoilers say temptation could strike in that suite, so we’ll see how the two of them handle it!

Are you rooting for Billy and Amanda to become a real couple? We’ll give you updates as other Y&R news comes in. Stay tuned to the CBS soap and don’t forget to check CDL often for the latest Young and the Restless spoilers, updates and news.