The Young and the Restless Spoilers: Theo Asks Lola For New Life Together in Paris – Proposes Leaving Summer & Kyle Drama Behind? 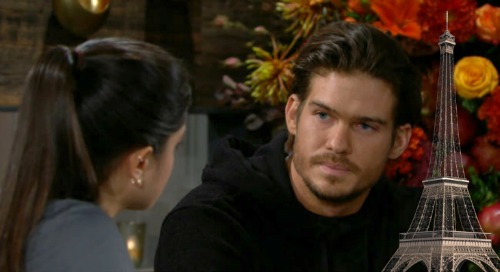 The Young and the Restless (Y&R) spoilers tease that Theo Vanderway (Tyler Johnson) has more opportunities ahead of him. Y&R fans know Theo’s growing increasingly bold about flirting with Lola Abbott (Sasha Calle). In fact, Kyle Abbott (Michael Mealor) recently got so fed up that he punched Theo! It’s obvious that Theo’s manipulating Lola and trying to worm his way into her heart.

Of course, Kyle’s outrage is also part of the plan. Theo knows he can look like the victim here if he pushes Kyle over the edge. The Young and the Restless spoilers say Theo’s already caused a rift and it’s only going to widen. Kyle’s issues with Lola will drive him to share a kiss with Summer Newman (Hunter King) – or perhaps even more.

Kyle and Lola’s marriage seems to be on the verge of falling apart. What happens once divorce is imminent? It’ll be interesting to see how serious Theo is about wanting Lola. Is she just a conquest in Theo’s eyes or does he envision a real future with her? Sometimes it’s hard to tell since Theo’s clearly obsessed with beating Kyle.

It’s doubtful Theo would be all that interested in Lola if she weren’t Kyle’s wife. Nevertheless, Theo does seem to connect with Lola. They can relate to each other’s backgrounds and have fought hard to accomplish their goals. Theo may get the girl, but will he keep her? That may depend on some interesting shakeups that are looming at Jabot.

Summer brought up Ashley Abbott’s (Eileen Davidson) old offer a while back. She pointed out that maybe Theo could still head on over to Paris, but he made it clear that he was staying put. The Young and the Restless spoilers say Ashley will return to Genoa City soon – and she’ll have some unfinished business to settle. Could this involve sweetening the pot and trying to lure Theo away again?

Theo may be tempted to have his cake and eat it, too. Theo could easily urge Lola to wash her hands of GC and run off to start a new adventure with him. He may think Lola needs to get away from Kyle and Summer for good. Theo could make a solid pitch for why Lola should start another restaurant in Paris and put her old life behind her.

Lola probably wouldn’t go for that idea – no matter how tempting Theo makes it sound. That’ll probably leave Theo with a choice. He may have to decide if he truly cares about Lola enough to stick around.