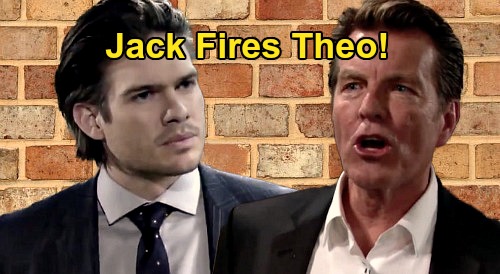 The Young and the Restless (Y&R) spoilers tease that Jack Abbott (Peter Bergman) seems to have set Kyle Abbott (Michael Mealor) and Theo Vanderway (Tyler Johnson) up to fail. If you’re trying to convince two people to stop fighting all the time, it’s a terrible idea to force them into a competition.

Jack has been pushing for peace, but now he’s given Theo and Kyle a seven-day rebranding challenge. This is only going to make the war worse! Jack’s move was like scolding a couple of kids for roughhousing and then putting them in the boxing ring.

There’s no way this is going to end well for either of them, but Theo may be the one who pays the steepest price. The Young and the Restless spoilers say plenty of scheming will be going on in the coming episodes. That includes a great deal of plotting from Kyle and Summer Newman (Hunter King).

Y&R fans will see Summer put a trap in place during the week of April 13-17. Later, Summer will conspire with Kyle and hope their hard work pays off. Jack’s not going to like it if Kyle and Summer do anything too manipulative, but maybe they won’t have to. Theo may have handed them a victory on a silver platter.

There’s surely a reason the show brought Kendra into the picture. Kendra is the disgruntled employee who’s been digging for dirt on Kyle – the one Theo promised to take care of once he was in charge.

Although Theo put his Kendra plot on hold, there’s a good chance it’ll come back to haunt him. That’s especially true if Theo uses Kendra to sabotage Kyle’s upcoming pitch.

All Summer and Kyle would really have to do is expose Theo’s shady behavior. Kyle and Summer could show Jack that Theo’s the problem. There’s no denying that Kyle has been problematic at times as well, but he can make it look like Theo’s the true pot-stirrer.

Not to mention Theo is using a Jabot employee to do his dirty work. You can bet Jack would be furious about that. Jack takes his father’s legacy very seriously and wouldn’t want Theo doing anything to jeopardize the company.

The Young and the Restless buzz hints that Theo may eventually end up working at Chancellor Media, which means he would need a reason to leave Jabot. We’re betting Theo won’t go willingly! Theo isn’t the kind of guy who backs down from a fight and walks away. That only leaves one option: Jack will most likely tell Theo he’s FIRED.

Will Summer and Kyle turn the tables on Theo? Will Theo get kicked out of Jabot after his Kendra scheme unravels? As other Y&R news becomes available, we’ll give you more updates. Don’t forget to stop by CDL frequently for the hottest Young and the Restless spoilers, updates and news.