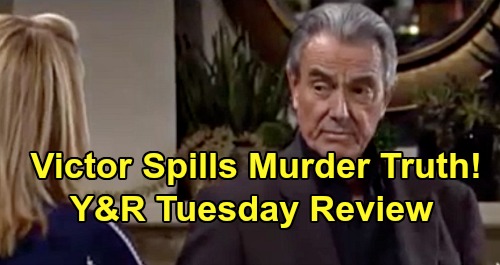 The Young and the Restless spoilers review for Tuesday, April 7, tease that Adam Newman (Mark Grossman) will tell Chelsea Lawson (Melissa Claire Egan) that Victor Newman (Eric Braeden) surrendered, and that he’s now the official CEO of Newman Enterprises. Adam will say that this erases any doubt about what happened in Kansas all those years ago.

Adam and Chelsea will strategize about what Victoria Newman (Amelia Heinle) and Nick Newman’s (Joshua Morrow) next moves will be, and Adam will feel a momentary twinge of hypocrisy since he’ll realize what drove Victor to kill AJ Montalvo. Yet, Adam will note that if Victor were in his position, he’d probably have used the information to his advantage, too.

Victoria will go on, complaining that she is going to be publicly humiliated, and Victor will say that they’ll tell people she’s still recovering. Victoria won’t see any good explanation for them not to fight Adam on this, but Victor will ask her to abide by his wishes. Ultimately, Victoria will get exasperated and leave, heading back to the Newman ranch.

Once there, Victoria will fill Nikki Newman (Melody Thomas Scott) in on what has gone down. Nikki will be floored, and she’ll beg Victoria to stay and talk to Victor again when he comes home. Victoria will refuse, saying that she isn’t staying at the ranch any longer. Nikki will wonder if perhaps it’s not possible for Victor to prove that Adam’s lying, or if Victor wants to stay quiet until he comes up with a plan.

But Victoria won’t think there is any good reason for Victor to give Adam power, and she’ll be incredulous that Victor seems to be playing right into Adam’s hand. Finally, Victoria will agree to stay at the tack house, but she’ll be clear with Nikki that she isn’t going to let Victor hurt her again.

Victor will urge Nikki to let him handle this, and he’ll state that he knows Adam better than anyone, and that things might get ugly. Again, Nikki will ask why Victor is caving to Adam’s demands, and all Victor will say is that Nikki should trust him and that he’ll protect his family at all cost. “Certain things are better left unsaid,” Victor will say, which won’t be enough for Nikki. Nikki will leave the room in a huff.

Next, on the new episode of Y&R on Tuesday, April 7, Theo Vanderway (Tyler Johnson) will spend some time with Dina Mergeron (Marla Adams) in the Abbott living room. Dina will be unresponsive as Theo talks happily about her ambition and the life she led. Lola Rosales (Sasha Calle) will arrive with flan for Dina, and Theo and Lola will talk to Dina and to each other gently, while Theo feeds Dina some flan.

Dina will even perk up a little when Theo mentions a particular hotel in New York that he and Lola will visit on their trip. Theo and Lola will then have a cute conversation about Theo’s cooking skills, and while this is going on, Kyle Abbott (Michael Mealor) will slip in the door and take in the scene, clearly upset by Theo and Lola’s affection for each other.

Soon, Kyle will make his presence known, and Kyle will say that he doesn’t want his grandmother to be overwhelmed by too many visitors. Kyle will ask Theo to step aside, which will lead to a heated argument during which Kyle will accuse Theo of using Dina to score points with Lola. The argument will escalate, and Dina will cry out, “John! Stuart! No, no!”

At that point, Jack Abbott (Peter Bergman) will rush in the room, angry with what he finds. Lola will take off, but Theo will stay, and once Jack gets Dina settled in her room, he’ll come out to the living room and angrily berate Kyle and Theo. Jack will be fed up, saying that he thought he made it clear that Dina was to have peace and comfort in the time she had left.

Jack will rail that Kyle and Theo took this thing between them into the office, into public, and now into his home, and that it is enough. Jack will fume that he wants both Kyle and Theo to leave now, and that they’ll bring this to an end tomorrow at Jabot.

It sounds like Tuesday’s episode will be terrific, so stay tuned to the CBS soap! Stick with CDL for the most recent Young and the Restless news and spoilers – we’ll be sure to keep you up to date on all the latest on Y&R.