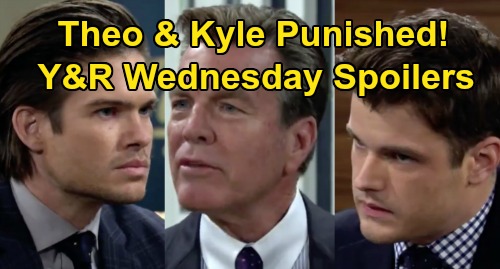 The Young and the Restless (Y&R) spoilers for Wednesday, April 8, tease that it’ll be judgment day for Kyle Abbott (Michael Mealor) and Theo Vanderway (Tyler Johnson). After Kyle provokes Theo and sparks another round of battle in Tuesday’s Y&R episode, it upsets Dina Mergeron (Marla Adam) and infuriates Jack.

That’s why the cousins will show up bright and early at Jabot on Wednesday. Jack will plan to deliver some major consequences, so Kyle will naturally be nervous.

After a pep talk from Summer Newman (Hunter King), Kyle will sit down in the boardroom with Jack. Theo will sit across from Kyle as they face the music. The question is: What kind of punishment will Jack have in mind?

It’s clear that changes have to be made – and it seems Jack will have to be the one to make them. Kyle and Theo certainly haven’t been able to make those changes on their own. Since Jack means business, he may determine that they just can’t work together anymore. As long as Theo and Jack are in the same orbit, they’re always going to have these fierce faceoffs.

Jack has warned Theo repeatedly to cut out all the fighting. He’s put Theo on notice about their family connection not protecting him, so Theo may get fired. Y&R buzz hints that Theo will eventually end up working at Chancellor Media.

Jill Abbott (Jess Walton) hit it off with Theo when they first met, so she may welcome Theo with open arms if Jack gives him the boot.

What about Kyle? Will he be demoted from the co-CEO spot? Although Jack has taken a step back from the company, he may not think Kyle deserves that kind of power.

If Jack steps back in somewhat or hands off duties someone else, Kyle could easily be stripped of his title. This whole co-CEO thing was only meant to be on a trial basis anyway.

Over with Amanda Sinclair (Mishael Morgan), she’ll get an apology from Jill. The Young and the Restless spoilers say Jill will be sorry for misjudging Amanda and for any backlash Amanda faced due to Colin Atkinson’s (Tristan Rogers) actions.

Jill will hope they can have a clean slate, so Amanda will probably suggest she’d like that.

Amanda will also hear about a surprising new job offer soon. Devon Hamilton (Bryton James) will ask Amanda to be the new clinic’s attorney, so she’ll be grateful he thought of her. Even so, Amanda will need a little time to mull it over. It’s a big decision that Amanda won’t take lightly.

Other Young and the Restless spoilers say Phyllis Summers (Michelle Stafford) will do some scheming. Phyllis will carry out a plan that’ll bring Abby Newman’s (Melissa Ordway) hotel project to a screeching halt. Abby thought she could beat Phyllis at her own game, but it seems she underestimated Phyllis once again.

Within the next episode or two, Abby will get some news that leaves her furious. It won’t be long until Abby receives updates on Phyllis’ roadblock, so we’ll see what she decides to do about it!