The Young and the Restless Spoilers: Tuesday, January 7 – Theo Back To Bad Boy – Amanda Confesses to Billy – Sharon Struggles 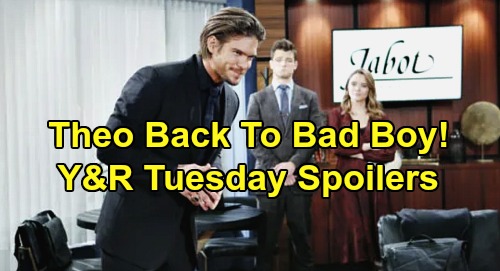 The Young and the Restless (Y&R) spoilers for Tuesday, January 7, tease that Theo Vanderway (Tyler Johnson) will push Summer Newman’s (Hunter King) buttons. He’ll undoubtedly goad Summer about Kyle Abbott (Michael Mealor) and how she’s stuck pining for him. Theo has seemingly ditched any redemptive progress and is reverting to bad boy form.

On New Year’s Eve, Theo ominously talked about getting rid of whatever was in the way. We can assume he means Kyle since he wants Lola Abbott (Sasha Calle) for himself. Theo might even urge Summer to team up with him so they can both get what they want.

Of course, Summer would likely shut down that idea. As much as she’s longing for Kyle, Summer isn’t keen on rocking the boat.

Speaking of rocking the boat, Tanner Watts (Chase Coleman) has certainly managed to do that for Tessa Porter (Cait Fairbanks). Her relationship was on solid ground until Tanner reached out and led to Tessa’s ex-husband confession.

However, an ex is an ex. Tanner is ancient history as far as Tessa’s concerned – and she never actually loved him. After “Teriah’s” anniversary party, Mariah insisted she knew there was more to Tessa than her past and her mistakes. She later said, “we love each other for who we are…right now…today.”

Mariah’s backtracking a bit at the moment, but she should get some advice from Sharon Newman (Sharon Case) in Tuesday’s Y&R episode. Unfortunately, Sharon will keep her potential cancer a secret from Mariah as well.

Heck, Mariah has kept plenty of secrets for Sharon – like the truth about “Sully McAvoy” aka Christian Newman (Alex Wilson) for example.

Deception is a way of life in Genoa City, and Tessa’s secret isn’t all that bad considering Chelsea Lawson (Melissa Claire Egan) launched a hostage crisis with her dead hubby’s laundered millions.

Even so, Mariah will struggle with trust issues that could get worse thanks to Tanner. He’ll chat with Tessa at her apartment and perhaps pile on the tour pressure, so it could lead Mariah to battle more concerns.

The secret theme will continue as Billy Abbott (Jason Thompson) learns what Amanda Sinclair’s (Mishael Morgan) been hiding. The Young and the Restless spoilers say Amanda will open up about her abusive ex-fiancé, Ripley Turner.

Billy will be grateful that Amanda trusts him enough to share something personal and traumatic. It’s only going to strengthen their already growing bond.