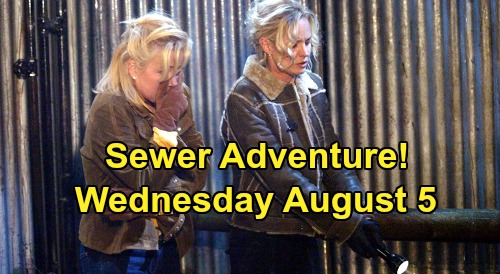 The Young and the Restless spoilers for Wednesday, August 5, tease that viewers will see an encore episode that originally aired on April 16, 2004. In the episode, Nikki Newman (Melody Thomas Scott) and Sharon Newman (Sharon Case) will face some serious filth as they trek down into a sewer drain. It will all be thanks to Larry Wharton (David “Shark” Fralick), who will claim to have dumped Cameron Kirsten’s (Linden Ashby) body there.

Sharon, Nikki, and Larry will wind up in the sewer drain, dealing with all of the disgusting sewer things that one would expect. It looks like the three will fend off rats, and Nikki will have some particular difficulty with the journey, as she’ll get sick on at least one occasion. Finally, Sharon, Nikki, and Larry will find Cameron’s body wrapped up in a sheet, and with one look, Sharon will scream and faint.

Over at Crimson Lights, Daniel will be upset as Danny tries to talk with him about the need to spend time with Phyllis. Daniel will balk, sting that he just wants to be with his dad and Gina Roma (Patty Weaver). Soon, Raul Guittierez (David Lago) will arrive and want to talk with Danny, prompting Daniel to leave. Raul will get Danny to agree to talk with Brittany Hodges (Lauren Woodland) about not giving up her singing dreams. Eventually, Danny will agree.

At Jabot, Jack Abbott (Peter Bergman) will visit the lab, where he’ll tell Drucilla Winters (Veronica Rowell) and Damon Porter (Keith Hamilton Cobb) that the Orchid Project is over and done, but that the decision wasn’t personal. Jack will also say that Tuvia is hanging by a thread, and that Damon should say hello to “his redhead friend.”

After Jack leaves the lab, Drucilla will blast Damon for risking their jobs with his relationship with Phyllis. Damon will think that Drucilla shouldn’t talk, since she never wanted to be involved in office politics – plus, his personal life is his own business. Damon will vow that he’s not done with the Orchid Project just yet.

Finally, Brittany will get a visit from Bobby Marsino (John Enos) to discuss her singing career, but she won’t want to talk about it, and she’ll be irritated with people telling her what to do and how to feel. Unexpectedly, Bobby will say that Brittany is right, and that he’ll go. Brittany will then soften, but Bobby will brush her off, saying to call him sometime.

Wednesday’s encore episode of Y&R sounds great, so be sure to tune in for a great walk down memory lane! We’ll be sure to keep you updated on all the latest Y&R news, hot spoilers, and updates going forward – here at CDL, we’ve got you covered!