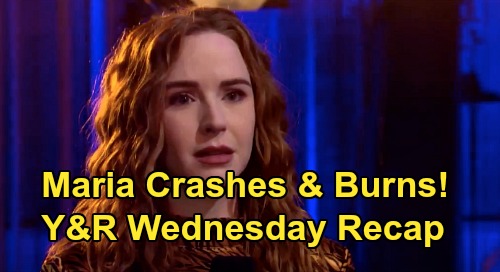 The Young and the Restless (Y&R) spoilers recap for Wednesday, March 18, teases that Summer Newman (Hunter King) will fill Kyle Abbott (Michael Mealor) in on some plans. It turns out Summer and Kyle will be meeting up with Nick Newman (Joshua Morrow) and Phyllis Summers (Michelle Stafford) later.

In the meantime, Phyllis will receive a letter of resignation from Chloe Mitchell (Elizabeth Hendrickson). Abby Newman (Melissa Ordway) will feel confident that more employees are going to bail. She’ll drop a hint about her latest adventure with Chance Chancellor (Donny Boaz), which will prompt Phyllis’ snark.

Abby will point out that at least she has a man, but Phyllis will imply she’s got one, too. Y&R spoilers say Abby won’t believe Phyllis and will warn Kyle to watch his back when he arrives with Summer. Abby will feel like that’s always a wise strategy when dealing with Summer and Phyllis!

Did Victor Newman (Eric Braeden) have something to do with AJ the loan shark’s death? It’s something Chelsea will think is worth mulling over.

After Adam decides to investigate, he’ll leave Chelsea to have her business meeting with Chloe. The Young and the Restless spoilers say Chloe and Chelsea will look forward to a new chapter.

They’re putting the hotel behind them – and Chelsea’s eager to begin her future with Adam. Chloe will promise she’s not going to cause problems. Chelsea and Chloe will be grateful for their renewed friendship.

At the ranch, Nick Newman (Joshua Morrow) will stand his ground. The Young and the Restless spoilers say Nick won’t be willing to walk away from his charity work entirely. Making more money for Newman Enterprises isn’t worth that sacrifice.

Once Adam appears, Nikki Newman (Melody Thomas Scott) will immediately offer a warning. She’ll worry about drama starting back up, but Adam will insist he’s there about the rundown farm.

Victor will note that can take care of that, but he’ll battle suspicions moments later. When Adam contends that Nick was the right CEO choice after all, Victor will look skeptical. Adam will mention his encounter with Alyssa Montalvo, but Victor will claim he doesn’t recognize that name.

Once Victor’s alone with Nikki, he’ll suggest Adam’s up to something. Victor will seem troubled by Adam’s apparent digging. Back with Nick, he’ll join Phyllis, Summer and Kyle in the Grand Phoenix lounge. Nick won’t get how Summer and Kyle expect him to just be fine with their reunion, but they’ll maintain that they belong together.

Phyllis will side with Kyle and Summer on this. Nick will get an earful for not meeting the moral standards he sets for everyone else. Phyllis will think if Summer and Kyle take things slow, they have a shot at making this work.

Nick will needle Phyllis about scheming to get the Grand Phoenix back. Summer and Kyle will notice how intense they seem before Nick and Phyllis abruptly leave. After Summer argues that her parents are “totally hooking up again,” Kyle will back her up on that.

Other Young and the Restless spoilers say Tessa Porter (Cait Fairbanks) will struggle a bit before a performance in Detroit. Tanner Watts (Chase Coleman) will look at his phone – obviously making sure his secret plan with Mariah Copeland (Camryn Grimes) is all set.

Later, Tessa will wrap her set as Tanner swoops in. He’ll announce that they have a special guest who’s not very musical, so he’s going to help her out. Mariah will appear as Tanner sings “If You’re Not Busy,” the latest song Tessa wrote for Mariah.

The Young and the Restless spoilers say Mariah will make an emotional speech in front of the crowd. Mariah will hope they can all be witnesses to the fact that this is honest and coming from her soul.

Tessa will listen as Mariah talks about “utterly and absolutely” loving Tessa with every atom of her being. Mariah will be sorry for her failure to trust Tessa and for the behavior that followed.

After Mariah publicly declares her love and how sorry she is, she’ll promise to never betray Tessa again. Mariah will beg Tessa to tell her to do anything and she’ll do it. Despite being visibly moved by Mariah’s words, a teary Tessa will dash off the stage.

Mariah’s going to win Tessa back eventually, but she’s really crashing and burning for now!

Back in Genoa City, Amanda Sinclair (Mishael Morgan) will talk to Nate Hastings (Sean Dominic) about Jared (Michael Maclane) and her own time in foster care. When Nate asks if Amanda ever looked into her biological family, Amanda will insist she wanted to avoid that minefield.

Over with Abby, she’ll notice Nate with Amanda as Adam appears. Adam will contend that Abby was too good for Nate and will want to stick together at the bottom of Victor’s pecking order. After Abby mentions starting an empire of her own, Adam will warn his sister about the dark places Victor can go.

The Young and the Restless spoilers say Adam will head home to Chelsea, who’ll get updates on his discussion with Victor. Adam will note that he brought up Alyssa’s name during his visit. Victor will be holding something back in Adam’s opinion, so Adam will undoubtedly keep investigating and find out what it is.

It sounds like the excitement’s revving up on the CBS soap. As other Y&R news comes in, don’t miss CDL’s latest updates. We’ll always have sizzling Young and the Restless spoilers and news to pass along.