The Young and the Restless Spoilers: Week of March 30 – Kyle Divorce Complications – Billy Not Scared of Victor – Chelsea Stirs The Pot 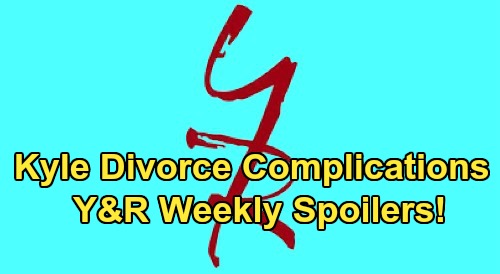 The Young and the Restless (Y&R) spoilers for the week of March 30-April 3 tease that some surprises are in store. First, Billy Abbott (Jason Thompson) will get an ultimatum during a faceoff with Victor Newman (Eric Braeden). It’s no secret that Victor hates “Billy Boy,” so he’ll inevitably remind him of their issues and offer a warning.

Victor may want Billy to stay away from Victoria Newman (Amelia Heinle) and avoid stirring up any other drama for the Newman clan. If Billy can’t play by Victor’s rules, there’s going to be trouble.

Of course, Jill Abbott (Jess Walton) has always meant for Chancellor Media to be as cutting-edge way to keep up with Newman Enterprises. Jill specifically mentioned their rival in her first pitch to Billy.

That could lead to more clashing between Billy and Nick Newman (Joshua Morrow) eventually, so Lily Winters (Christel Khalil) should remain in the middle of their conflict. Speaking of conflict, Chelsea Lawson (Melissa Claire Egan) could create some with a little pot-stirring. Will that involve Adam Newman’s (Mark Grossman) latest plan?

Chelsea’s backing Adam up in his efforts to gain the upper hand, so she’ll do her part to keep his goals on track. As for Adam, he’ll rope Victor into a Crimson Lights meeting and drop an evidence bomb. Adam will show off proof that Victor murdered AJ Montalvo – at least Adam will consider it proof!

Time will tell if that’s true or not, but Y&R spoilers say Adam will make his demands and hope this works out the way he wants. If Victor doesn’t go along with Adam’s terms, he’ll risk public exposure of the info Alyssa Montalvo (Maria DiDomenico) uncovers.

Back with Nick, he’ll finally stop all the games with Phyllis Summers (Michelle Stafford). They’re crazy about each other and they’re both adults here. Why not go ahead and take the leap?

Although Phyllis and Nick have been afraid of hurting each other again, that won’t be a good enough reason to stop this reunion. Sometimes you just have to put your heart out there, even if it’s terrifying.

Amanda Sinclair (Mishael Morgan) will have a similar idea when she makes a bold move. It looks like Amanda will ask Nate Hastings (Sean Dominic) out on a date, which is sure to leave him thrilled.

Next, Abby Newman (Melissa Ordway) and Chance Chancellor (Donny Boaz) will do some plotting. The Young and the Restless spoilers say Phyllis may never see their next scheme coming!

Over with Theo Vanderway (Tyler Johnson), he’ll be determined to score some dirt. While Kyle Abbott (Michael Mealor) works on getting his divorce from Lola Rosales (Sasha Calle) squared away, Theo will be busy planning his latest strategy. He’ll hope he can take down Kyle in more ways than one, but he may regret ignoring Summer Newman’s (Hunter King) threat about backing off.

The Young and the Restless spoilers say some curveballs are coming in this cousin battle, so we’ll see if Kyle or Theo comes out on top. As other updates emerge, CDL will have more news to offer. Are you eager to see all this Genoa City action? Y&R fans will want to stop by again soon for the latest Young and the Restless spoilers, news and updates.