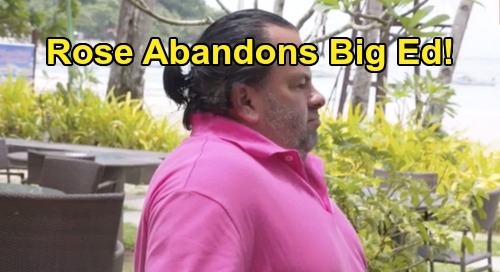 TLC 90 Day Fiance: Before The 90 Days spoilers tease that viewers are in for a shocking development on Sunday’s all-new episode of Before The 90 Days. If you’ve watched the sneak peek for Sunday’s episode that’s available on the TLC Go app, you know that Big Ed Brown told Rosemarie Vega that he didn’t want more children, and she was shocked.

Ed went on to tell Rose that he wasn’t going to change his mind, and that he even had a vasectomy scheduled when he returns to the United States. Rose wasn’t happy about that news, and she said that she needed time to think about it. Well, in a new sneak peek exclusive to People Magazine, it looks like Rose might have bolted from the relationship.

Ed explains in a confessional during the sneak peek: “Last night, I finally revealed to Rose that I want to have a vasectomy and I don’t want any more kids. And when I woke up this morning, she was gone. She’s not answering my texts, and she’s not answering my phone calls.”

Ed continues: “I’m really worried. She didn’t leave a message with the front desk. I looked all around the hotel, but she’s nowhere to be seen. I don’t know where she is, and I’m really confused and I’m sad.”

Ed looks really worried in the video, as he tries to have breakfast at the hotel but is clearly concerned about where Rose has gone. “Coming into this vacation, I thought she wants to marry me,” Ed says. “It was really more about me trying to figure out for myself – was Rose the one that I wanted? Now it’s a 180. Now it’s Rose really sorting out for herself whether or not she wants to be with me.”

This is a big situation for Ed, especially since Rose is currently wrestling with the news about him not wanting children. Could she have taken off for good and hopped a plane back home? Given that they are at a vacation destination, it’s also possible that Rose is somewhere on the grounds and simply taking some time away to think.

Still, you’d think that she’d at least have let Ed know where she was going, or that she needed some time to herself. We’ll see what becomes of this, but bolting on someone isn’t a great way to cope with problems in a relationship. Then again, putting off a discussion about kids when you want to marry a woman 31 years your junior isn’t so great either.

Do you think that Rose actually left Ed for good? Stick with 90 Day Fiance: Before The 90 Days and keep checking CDL for all the latest 90 Day Fiance news, updates, and spoilers!