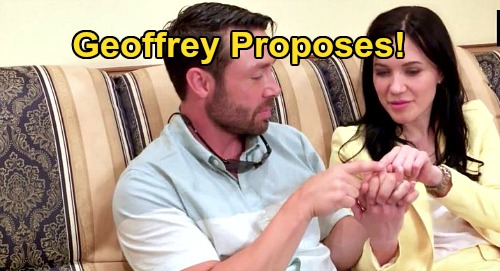 TLC 90 Day Fiance: Before The 90 Days spoilers tease that Geoffrey Paschel may soon be taking a very big step. As 90 Days viewers know, Geoffrey has been romancing Varya Malina over in Russia, and things have been rocky lately, since Geoffrey only recently came clean about his past prison stint. Of course, Varya was shocked by that revelation, and she stated on last Sunday’s show that she’s still trying to figure out if she can deal with it.

And then, Geoffrey had the task of telling Varya’s mother and brother about his past drug selling and prison time. That didn’t go well at all, and Varya’s mom has been chilly to Geoffrey ever since. Varya’s mom just can’t accept that her daughter wants to be with someone who’s been to prison, and she’s advised Varya to really think about what she wants.

Currently, Varya is still spending time with Geoffrey and getting to know him, but she’s really struggling with his criminal past. In fact, Varya even told Geoffrey’s friend Igor that she wasn’t in a hurry to leave Russia, and she’s said in the confessional interviews numerous times that she’s just not sure that she can come to terms with Geoffrey’s past. Varya really needs some time and space to think it all over.

But it doesn’t look like Geoffrey’s going to give Varya the space she needs. In the preview for next week’s all-new episode, Geoffrey and Varya are shown walking together outside and having a good time together. That’s a great sign, but it doesn’t mean that Varya is ready to put Geoffrey’s past behind them and go forward and get married.

Yet, it certainly looks like a marriage proposal is what Geoffrey has on his mind. “I’m leaving in just a few days,” Geoffrey says in the previews, “and there’s no doubt that she’s my soulmate. So, I’m ready to take the next step in this whole relationship.”

The scene then flashes to Geoffrey and Varya sitting at a picnic bench with cocktails, when Geoffrey suddenly starts to stand and says, “I want to continue this adventure with you.” It really looks like he’s about to drop to one knee and propose, while Varya sits there absolutely stunned.

Is Geoffrey really going to propose right then and there? Does he really think that it’s a good idea to push the issue of marriage when Varya and her family are still struggling with the issue of his past? Of course, this could all be a big fake-out, but it has all the vibes of a marriage proposal, and it sure looks like Varya thinks that’s what’s coming.

Do you think that Geoffrey is going to propose to Varya? Keep watching 90 Day Fiance: Before The 90 Days and keep checking back with CDL for all your 90 Day Fiance news. We’ll keep you posted with the latest updates and spoilers!