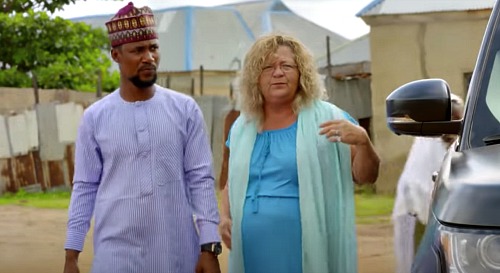 TLC 90 Day Fiance: Before The 90 Days spoilers tease that Usman Umar has a new plan in the quest to get his mother’s blessing so that he can marry his love Lisa. As viewers of the show are aware, Usman took Lisa Hamme to meet his mother in her village, and it didn’t go well at all. Usman’s mom and elder sister immediately took issue with Lisa, and his mom got up and walked off from the meeting, signaling her displeasure with the relationship.

Of course, this came after Usman and Lisa took great pains to make Lisa fit in as much as possible to her surroundings. Even though Lisa sticks out like a sore thumb because she’s White, Usman made sure that Lisa was dressed appropriately, wore no makeup, and brought a goat as a gift for his mother.

Alas, none of it worked, and after the terrible meetup, Usman and Lisa asked Usman’s brother Muhammed to speak with his mother on their behalf.

Well, in the new teaser video released by TLC on YouTube for this Sunday’s all-new episode, it’s revealed that Usman has another plan in store. He’s going to get Lisa to go to the mosque to pray with his mother.

Now, Usman’s mom is a devout Muslim, so he’s hoping that this will get her to see that Lisa is serious about marrying him and that she should give her blessing for their union.

In the teaser video, Lisa says, “This morning, Usman’s brother Muhammed called, and he told us that he was not able to convince his mother to give her blessings. I’m heartbroken because the clock’s running. I don’t have many more days.

But Muhammed suggested that we go to mosque with mommy and pray. He thinks this will help because she is a devout Muslim.”

Of course, as viewers are aware, Lisa is not Muslim, she’s a Christian woman, and so one wonders whether Usman’s mother will really be impressed by Lisa attending the mosque and praying.

Mom might just see it as a cheap tactic to get on her good side, which could end up turning her off to Lisa even more. And it could make her downright angry, especially if she doesn’t know Lisa is coming!

Understandably, Lisa appears pretty nervous in the video as she and Usman are on their way to the mosque. “I’m nervous about seeing your mom. She didn’t care for me the first time. I’m having my doubts she’s going to like me a second time.”

We can definitely feel Lisa’s nerves in the video – it’s got to be hard knowing that your love’s mom walked out on you the last time she was in your presence!

But as far as Usman is concerned, this is a necessary step. “I want to go to America, so I will do anything possible to make sure that it will happen,” Usman says in the video. I pray and hope this should work.”

Well, we have our doubts that this is going to go well, but you never know. Do you think Lisa going to the mosque to pray with Usman’s mom is going to work…or will it backfire royally? Stay tuned to 90 Day Fiance: Before The 90 Days and don’t forget that CDL is your go-to source for all the latest 90 Day Fiance spoilers, news, and updates!