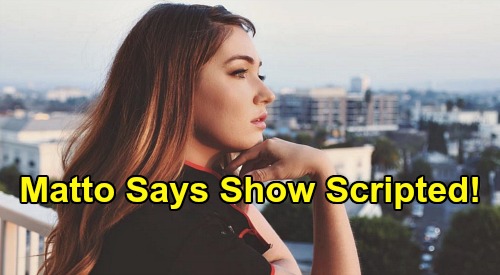 TLC 90 Day Fiance: Before The 90 Days spoilers tease that Stephanie Matto and Erika Owens seem to be on the outs for good. As viewers watched on Sunday’s episode, the two ladies got in a huge fight after Erika revealed that she had been in an on-again, off-again 10-year relationship with another woman who had kept her a secret from her parents. It ended with Stephanie throwing and breaking a bread bowl.

Erika was apparently trying to share something painful from her past with Stephanie, so that Stephanie would understand how she was feeling about Stephanie’s decision not to come out to her mother during a recent video chat.

As viewers will remember, Stephanie was about to make the “confession” to her mom via video, but then decided at the last second to tell her mom that she had gone shark cage diving instead.

Erika thought that if she told Stephanie about her past and being hidden from her ex-girlfriend’s parents, it might help Stephanie see where she was coming from. It didn’t, and Stephanie blew up in anger after hearing this critical detail about Erika’s past for the very first time.

That led to huge fight and Stephanie attacked Erika once again about sleeping with some of her friends. The whole thing was pretty ugly.

Well, Stephanie has been offering some comments on the big fight scene on her Instagram feed that put things into a little more perspective. An Instagram user replied to one of Stephanie’s posts by joking that the probably threw the bread because it was dry and stale.

To that, Stephanie replied, “lol, the bread throwing was extra. I really thought the bowl was plastic but by the time it flew out of my hands, it was too late.”

Then another Instagram user responded: “Throwing the bowl was not ‘extra.’ It was violent. Even if you thought it was plastic, throwing things at people in anger is a huge red flag…”

To that, Stephanie replied: “First of all, I didn’t throw the bowl at anyone. I threw it on the ground. Second of all, the whole exchange was to a degree planned out by production. The bread throwing was planned. The conversation, not so much.”

Another Instagram user then chimed in, saying: “That explains a lot because that bread throwing looked awkward.” Stephanie replied: “Yeah, we knew there would be a “talk” and we joked beforehand about me throwing bread. We didn’t discuss the bowl, but the bread was in the bowl, and the convo had escalated and spiraled so much that I wasn’t even thinking straight.”

So let’s be clear here – Stephanie is making a clear statement that 90 Days production scripts much of what we see on TV. In other words viewers can’t trust the legitimacy of what they see on the show.

Finally, another Instagram user made an interesting point. This person wondered “what Erika meant when she was explaining how her ex kept her a secret for years and it was painful…if she only just came out to her parents while you were there, doesn’t that mean she also kept that ex a secret?” To that, Erica replied: “Exactly, the story is way more complex than the show indicates and people will never know.”

At any rate, this is Stephanie’s side of the story, and of course Erika has her side as well. But Stephanie’s comments do shed some light on the fact that there’s likely way more to their fight than meets the eye – both in terms of the complexity of the issues involved and in how the whole thing was staged.

We’ll see what happens with Stephanie and Erika on next Sunday’s all-new episode of the show. They’ve pretty well broken up, but the previews for Sunday show Stephanie and Erika meeting at a restaurant to talk, so perhaps they’ll call a truce or give things another go.

What do you think will happen when Stephanie and Erika meet again? Stay tuned to 90 Day Fiance: Before The 90 Days and don’t forget that CDL is your go-to source for all the latest 90 Day Fiance news and spoilers!

I'll never tell, tell on myself but I hope she smells my perfume ? #90dayfiance #beforethe90days #britneyspears