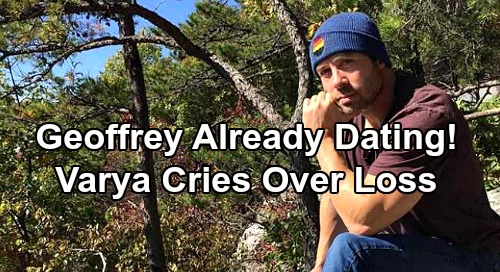 TLC 90 Day Fiance: Before The 90 Days spoilers tease that Geoffrey Paschel may end up seeking greener pastures. As viewers know, on last Sunday’s episode of Before The 90 Days, Varya Malina rejected Geoffrey’s marriage proposal, although from her perspective, she stopped short of saying “no.” Instead, Varya said that it was too soon for her to agree to marry Geoffrey, and she wanted to wait and see what happened.

Well, for viewers, the really wasn’t a surprising outcome, given that Varya had told Geoffrey’s friend Igor that she wasn’t sure that she was ready to leave Russia. Varya has also expressed a great deal of doubt in the confessionals about Geoffrey’s criminal past, and as viewers know, Varya’s mom does not accept Geoffrey due to his past.

So it seemed that Varya wanted to continue on with the way things currently stand between herself and Geoffrey, but that wasn’t ok with Geoffrey. It was like someone turned off a switch in Geoffrey when Varya didn’t accept his proposal, and he saw the writing on the wall.

Geoffrey took Varya’s rejection for exactly what it was: a rejection. And even though Varya tried to downplay what it all meant, Geoffrey was miffed.

Geoffrey didn’t even budge when Varya rushed back into the airport to tell him that she didn’t want him to go. He essentially pried himself away from Varya and went about his trip back home, telling Varya that they had their chance and that it was done.

Amazingly, Varya seemed surprised by this, not really realizing the effect that her rejection had on Geoffrey.

Well, in the previews for next week’s all-new episode of Before The 90 Days, Geoffrey is ostensibly shown going out on a date back at home in the states and moving on with his life, although he states that Varya has been texting him nonstop since he returned from Russia.

But will Geoffrey be susceptible to Varya’s constant text messages – of course, we don’t yet know what Varya will be saying in those messages, but it stands to reason that if she’s flooding Geoffrey with messages, then she might be trying to persevere their relationship.

However, it might just be too late from Geoffrey’s perspective. Geoffrey feels hurt, and he might want to start over with someone new – someone with whom he feels he has a real shot with, rather than someone who is ambivalent about being with him.

It will be interesting to see just how much groveling and begging Varya is willing to do, and if she’s really serious about wanting Geoffrey back. And will Geoffrey cave and be willing to continue on with Varya, perhaps letting her have the time she needs to determine whether she can live with his past?

Geoffrey seemed pretty resolved to move on when he left Russia, so getting him to continue the relationship could be a tough sell on Varya’s part.

Do you think that Geoffrey will be persuaded to continue in a long-distance relationship with Varya? Keep watching 90 Day Fiance: Before The 90 Days every Sunday night so you don’t miss the action. And sick with CDL for all the sizzling 90 Day Fiance updates. We’ve got all your news and spoilers right here!