TLC ’90 Day Fiancé Spoilers’: ‘Before The 90 Days’ – Why Is Ash Naeck Hiding Avery Warner From Clients – Is Ash Really A Male Escort? 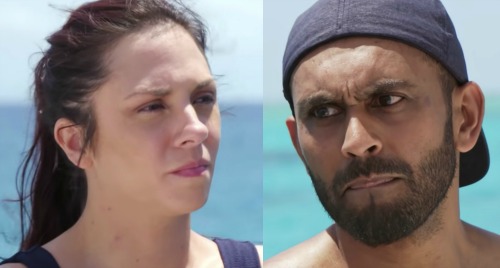 TLC ’90 Day Fiancé Spoilers’: ‘Before The 90 Days’ spoilers tease that Avery Warner will soon continue her big confrontation with Ash Naeck. As viewers know, Avery took a moment aside with Ash on their snorkeling trip to question him about all the text messages on his phone from the women he “relationship coaches.” Avery has a big problem with the nature of Ash’s texts – they’re pretty voluminous and flirtatious and she doesn’t like it.

And of course, who can forget that Ash didn’t acknowledge that he and Avery are in a relationship? As viewers will remember, Ash suddenly blurted out that he’s “single” right now, which really rubbed Avery the wrong way. After all, she’s come all this way with her two kids to be with Ash, yet he says he’s single. What’s going on here?

Well, Before The 90 Days spoilers say that Avery will keep quizzing Ash about his relationship coaching business on the next episode of the show. It’s going to get pretty uncomfortable, and for Avery, who trekked her kids to Australia to be with the man she fell in love with, she’s going to want some answers.

So, why is Ash so skittish about his profession, and what’s up with all the flirtatious text messages on his phone? Well, in a sneak peek video posted by TLC on YouTube, Avery reveals that Ash sent her a text exchange from one of his clients who hit on him during which he turned the client down.

That was apparently supposed to appease Avery and prove that he doesn’t have anything going on with his clients.

But to her credit, Avery pushes back, wondering why Ash isn’t more up front with his clients about the fact that he’s seeing someone. Avery would have felt a lot better if Ash had told this client that he was in a relationship.

But Ash seems to want to play it both ways – that is, enjoy his relationship with Avery, but also have flirtatious relationships with all the women he’s coaching, without telling them that he’s in a relationship.

Our question here is this: If Ash is really just a “relationship coach,” then why would he need to keep his relationship with someone a secret from his clients? Wouldn’t it totally benefit Ash to show his clients that he’s in a successful relationship – after all, he’d be practicing what he preaches, right?

Well, all this leads us to wonder about the nature of Ash’s business, and whether he actually has relationships/flings with the women he’s supposedly coaching. Or worse, could Ash be a male escort to all these women?

Now THAT would explain why he wants to play it both ways! And it would totally explain his serious defensiveness every time Avery brings up his clients.

Avery ends the sneak peek video by saying, “It does worry me a lot to now know what he actually does tell his clients. I just hope that he’s being true to me.” Well, we hope so, too, but it just seems like there’s much more to Ash’s relationship coaching business than meets the eye. Is Ash intimate with his clients?

What do you think? Could Ash be a male escort, rather than a mere relationship coach? Stay tuned to 90 Day Fiance: Before The 90 Days and don’t forget that CDL is your go-to source for all the latest 90 Day Fiance news, updates, and spoilers!