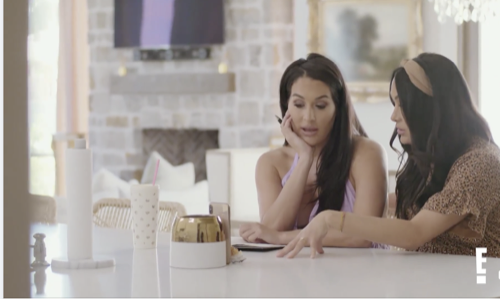 Tonight on E! their reality show Total Bellas featuring WWE superstars, Nikki & Brie Bella airs with an all-new Thursday, December 17, 2020,  season 6 episode 5 called, “Bye Bye Bella,” and we’ve got your Total Bellas recap down below! On tonight’s episodes, in the Season 6 episode, 5, as per the E Online synopsis, “Nicole and Artem attempt to change their birthing plan so they can have their baby in Phoenix, but that ends up complicating things for the entire Bella family. Brie worries about how she’ll deal with a new baby once Bryan goes back on the road.”

Nikki and Artem are installing the car seat in the car. She says it is typical of Artem to do things without reading the directions. The find out they installed the wrong car seat and put it the wrong way. Once they have the right one, all goes well.

Nikki is giving Brie a pedicure. Brie tells her that when she has the baby, Bryan is going to have to work and she doesn’t know how she is going to do it. She told him yes, but now she is having an anxiety. Nikki tells her that becuase of their medical insurance they have to have the baby in LA.

Nikki and Artem are packing up their bag and doing a test drive to the hospital so they are prepared when her water breaks. Also, Nikki finds out she doesn’t have to go to LA after all to have the baby, because of COVID, her doctor can deem it to be an emergency, and she can’t wait to tell Brie.

Brie can’t get off her wedding ring, she has swelled, Artem tries to help her. Nikki tells Brie they are going to have their baby in Arizona and the two of them couldn’t be happier. Artem gets the ring off. Mom calls, she said she went to the doctor and It was a waste of time. Nikki thinks that the Bells Palsy could be worse.

Brie is with Nikki when she gets her ultrasound, they both can’t believe they could actually have their babies on the same day. Brie tells Artem that Mateo loos like Nikki. He is about a week ahead in his growth.

At Nikki’s house, Artem is working on a vanity. Nikki tells him that she just got off the phone with her business manager and she has bad news. The insurance won’t cover her having the baby in Arizona. They can’t say something is an emergency if it is two months away. She is so upset, she doesn’t know what kind of birth she is going to have. Everything was coming together and not it has all fallen apart. Once she s six weeks away from her due date, they have to be in LA because she has to go to the doctors every week. She is so nervous to tell Brie this.

Nikki is in the car with Brie, she tells her that she is not covered in Arizona to have her baby. She and Artem had their hearts set on having the baby there, but they have to do what is best for them. Brie says that they have been her support this whole time while Bryan has been away, and she doesn’t know what Bird is going to do. Nikki says she has to leave in a few days.

Bryan calls Brie to see how she is. She tells him that Nikki and Artem are leaving for LA in a few days, she is alone with Birdie and two dogs and she doesn’t know she is going to do. Brie tells him that it would be nice if he could be there.

Mom drops by Brie & Bryan’s house for a visit, Nikki is there. Nikki tells her that she is freaking out, she has nothing ready for the baby. This is tough, where does mom go, to Brie’s house or Nikki’s house, her heart is breaking. She says wherever she does go, she is going to worry about the other one. Brie tells her to go with Nikki since this is her first baby.

Brie and Nikki are seeing a photographer to take pictures being pregnant together. They nail the photoshoot and Artem shows up to have some photos done with Nikki.

Artem and Nikki are all packed up. They are over at Brie’s house, Birdie is happy that they are there. Brie tells Nikki that she should tell their brother that she is going to LA. They facetime their brother, Nikki tells him that she wants him to be there for Brie because she is always afraid to ask for help. The ice cream truck comes around, thanks to Nikki and Artem who made the arrangements. They go outside with Brie and get popsicles. Brie and Nikki are so sad that they are separating, they thought they would have their babies together. They do a group hug, Nikki and Artem leave.

In the car, Artem tells Nikki that he really doesn’t want to leave. Neither does Nikki, Brie is her comfort and security, and now it is gone. She realizes that having her so close had meant the world to her.