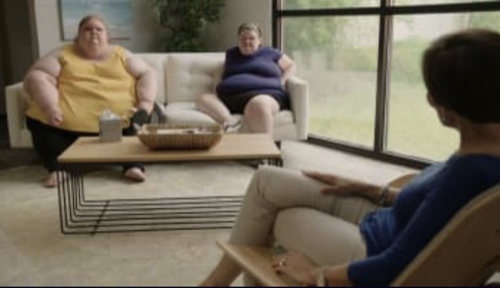 Tonight on TLC their fan-favorite series 1000-lb Sisters airs with an all-new Monday, February 8, 2021, Season 2 Episode 6 and we have your 1000-lb Sisters recap below. On tonight’s 1000-lb Sisters season, 2 episodes 6 called “There’s Something About Jerry,” as per the TLC synopsis, “Tammy’s boyfriend, Jerry, comes to visit just in time to celebrate the sisters’ favorite holiday: Halloween.

Tammy’s sister Misty questions Jerry’s intentions. Amy has to face another weigh-in after her concerning appointment with Dr. Procter.”

It’s Halloween time, Michael bought Tammy a pumpkin and he and Amy are over there to visit her. They talk about Amy leaving after the baby is born. Until then, Tammy says they are going to fight. Amy is seven months pregnant, a little nervous because she hasn’t given up the cake, the cookies, and the candy. Amy loves Halloween, but when she was young she didn’t dress up because it was hard to find costumes to fit her. Therefore, she tries to come up with some cool Halloween themed makeup every year.

Tammy gets a call from her boyfriend Jerry, he is coming over soon. Amy is shocked, it’s been a year since Tammy has seen him. She met him on a Big Beautiful Woman site. Tammy is really excited that Jerry is coming to visit. Tammy wants her family and Jerry to get along, they are her world, her life. Tammy says they are going to watch movies when he comes. Amy is worried that Jerry won’t show up and it will really depress Tammy.

Tammy is getting ready, Jerry is about an hour away and it is an eight-hour drive. She says it feels like a dream that he is going to finally be there and it is taking their relationship to the next level. She and Jerry have talked about being married, but she is worried that he might like Kentucky, the house. He left his house at 4 am, she is so excited for him to be there, she wishes he would just hurry up and get there already.

Two hours later, Tammy gabs her walker and heads outside. She is freaking out a bit, she knows what Jerry thinks about her but what is he going to think of Kentucky. She says she is a little worried he may not show up but when he says he is going to do something, he does it. Jerry pulls up, and the butterflies start for Tammy.

Jerry pulls up a chair beside Tammy, he pinches her and says it feels like a dream. He met her online on a BBW group, Tammy’s personality stuck out at him and her looks attracted him. He loves all size woman. He asks her if she is happy to see him, she says yes. She is nervous, she can’t stop thinking about how juicy his lips are. He is nervous about meeting Amy in person, he knows the two are really close. Amy comes out with Michael, she tells him that it is nice to finally get to see him in person. She asks about his kids, he has six of them, Amy is not sure how to react to that.

She then asks about grandkids, he has five of those. He likes Kentucky, he says he wanted to get out, it was the perfect time to come see Tammy. Jerry is feeling like he is being interviewed by Amy. Jerry brought some candy, but it is not sugar-free and Amy says she can’t have it, she is on a diet. Jerry says he is down for a couple of days.

Seeing that candy, Amy is really worried that Tammy is not going to meet her weight loss goals. Jerry can’t afford to lose weight, but Tammy can and needs to do it now. Tammy is so thankful for Jerry to be there, she has someone to talk to. The next morning, Jerry says his night with Tammy was amazing. They are outside, setting up for Tammy and Amy’s video. Jerry says the two women are like two big kids. He is happy to be there with Tammy and get to know her better. The women play a game of trick or treat and Jerry doesn’t understand what the video is for.

Tammy says she and Jerry have great chemistry, she sees a future with him. He on the other hand says Tammy makes him laugh and maybe he might see himself with her long tmer.

It is time for Amy to call her doctor, she is worried because last time it didn’t go so well. She says she is seven months along, its been a bumpy road, she has to go to the ER because she ate Chinese food for breakfast. Dr. Proctor is Amy’s bariatric surgeon. She needs to focus on protein and vegetables and he thinks she is using the pregnancy as a reason to eat whatever she wants. She weighs herself, she is 290.8 and that is not unreasonable at this stage of her pregnancy. Her OBGYN is happy with her weight. Dr. Proctor thinks she is doing better. He asks about her sister, she tells him that she weights 644 pounds now and they don’t bring her bad food anymore. Dr. Proctor says she is getting the bad food from somewhere and she is killing herself.

Amy takes Tammy to the Halloween store, Jerry is there, and Amy tells him he needs to wear a sumo wrestler costume so he can feel as big as Tammy. They actually find one for Tammy, it is a 6x and it is a bat. Amy finds one that is a 50’s poodle skirt costume with a puppy on it. Later, Tammy wants to take Jerry to do one of her favorite fall activities, a haunted hay ride. Misty’s coming to meet Jerry and she is kind of nervous to know what she thinks of him, or what she is going to say. She really thinks that Misty is going to have a problem with Jerry and she says she has mouth diahrea. Amy asks Tammy what happened in the bedroom the night before, Tammy says she won’t talk about it, Amy says it is ok they heard her screaming through the walls, and they both laugh. Jerry finds a vampire costume to match Tammy.

Everyone is getting ready, putting on their Halloween costumes. Misty arrives and tells Jerry that it is good to meet him, her first impression, he is too quiet and she doesn’t trust him. Misty gets anxious when Tammy tries to get into the vehicle, she looks like it hurts when she drags herself in. Michael is watching over her, Misty offers to help. Jerry and Misty get in, they are off. Misty starts asking Jerry questions, his life story, what his intentions are. Misty thinks Tammy needs to slow down, concentrate on her diet. She is worried that Jerry will try to keep her at a certain weight because he likes big women. Misty asks Jerry if he is ok with Tammy losing weight, he says yes and Amy says if not, its going to be short relationship.

They arrive at the haunted hayride, Michael tries his best to push Tammy around and she thinks Jerry could at least offer to help. It is kind of awkward for Tammy, but this is not the first big girl that Jerry has been with so he shouldn’t be shocked. A lot of scares and a lot of laughs, everyone has a good time. The ride is over, everyone gathers around the picnic table for some food. Amy tells Jerry that Tammy has to lose 100 pounds in four months. She understands that he has to eat a lot for his metabolism but if Tammy keeps eating the way she is, she is going to die. Jerry says he wants her to get the surgery, because it will help her health wise and she will be able to get around better.