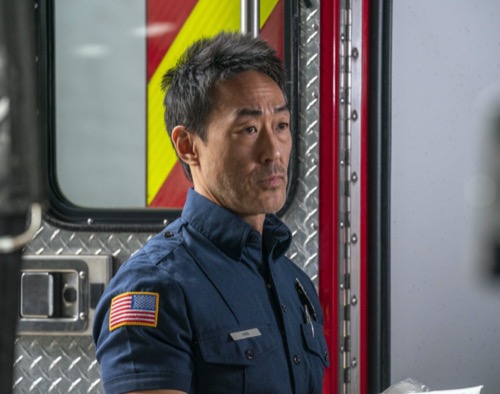 The 118 rush to save lives endangered by a bomb threat.Chimney has a hard time keeping secrets when Maddie and Buck’s parents come to town.”

Athena’s daughter May became a 911 dispatcher. She grew up around first responders. She wanted to help the city as well by doing her part and that’s where becoming a dispatcher comes in. May was dedicated to making this new path for her work. She went through training and she was finally ready to take calls however her first one was a Karen.

A Karen is an older woman who can best be described as rude, selfish and demanding. She treats every person around her as if they were her own personal servant. This Karen even tried to treat 911 as a personal friend with the way she kept calling them. She called this time and she got May. May ignored her pleas to send help because being hit by a water gun wasn’t actually a crime and so May was about to ignore her when she overheard a genuine emergency.

May overheard a fight between the woman and someone who broke into her home. May has been trained to handle situations like this and so she sent the police to the location. This time it was Athena who took the call. Athena responded to what she thought was a home invasion and it turned out it was a homicide. Someone murdered the Karen.

The firefighters later arrived to confirm the death and both Buck and Eddie joked around the scene. They pretended to be investigators by noting what was suspicious. They noticed that Karen stole her neighbors’ mail and theorized she might have seen something she shouldn’t have. Athena eventually told the guys to stop joking around. And she took over the case with a detective.

Athena and the detective later realized just how hated their victim is. She intentionally poisoned a dog for like to come into her yard, she called 911 on a little girl selling lemonade without a license, and her death in the middle of an enjoyable block party was just so her. She managed to ruin the day for everyone. There was one neighbor who said that she was just miserable.

She was so angry with her own life that she tried to make everyone else just as miserable as her own and so Athena was going to have a hard time with this case. She was doing her best to investigate as her own daughter dealing with the trauma. May overheard a woman being murdered. She couldn’t help but wonder what if she had just done as the lady suggested and sent help earlier.

May talked to her father about this. He was upset that she overheard a homicide and so he didn’t like the idea of her being a 911 dispatcher either. He didn’t want his daughter to be traumatized. May told her father that she needs at least one parent’s support for this and she suggested that he “dad up”. So, he suggested that she talk to her mother about her regrets.

May thought about talking to her mom. She went looking for her and her mother wasn’t there because she was still off working the case. Athena and the detective even closed the case. They found out one of the neighbors was a con-woman on the run. She wanted for armed robbery and bigamy and so she definitely didn’t want her husband finding out about her past.

Rita Ambrose whose real name was Jeanine Crowder was arrested. The murder weapon was found in her home and a piece of mail with her name on it was stolen by the victim. It’s why Jeanine killed the Karen. She was arrested and the case was closed, but May was having a hard time shaking it off and she needed to speak to someone and so she spoke to her stepdad, Bobby. Bobby was a firefighter.

He’s lost people both professionally and personally. He told May that she was going to be wondering for the rest of her life about the what if. This only wasn’t going to be the first time she lost someone and so the only to deal with it is by admitting that there wasn’t anything you could do to save that person. And May took Bobby’s advice.

May went back to work the next day. She was handling her calls for the first time by herself and she was doing really well. May thought she could handle whatever came next. Only she never thought she would run into a Stan. Stan Wentworth is a man who called May and he told her he planted a bomb. He said he wanted to kill as many people as he could because they were all hateful. May hadn’t known how to handle this call and so she called for a supervisor. They both heard Stan threaten people. Stan also admitted to his full name because he didn’t care anymore and he said it was too late to stop him. The police were notified about Stan. They went to his home and they found it abandoned. The police had no idea where he went.

It was May who figured it out. May researched Stan. She found his social media and she realized that he’s been fired several times over the past twenty years. His longest-running job was of twenty years. He was fired after he was injured on the job and the company refused to help pay for his injuries. It turns out Stan’s just lost his latest lawsuit against the company. May figured out Stan would target the place and so the police plus firefighters showed up at the building. Both Buck and Chimney were happy to get called into work because they were suffering through a family visit from Buck’s parents. His parents were awful. They made Maddie’s situation with her ex-husband about them. They also demanded to call their children by the names on their birth certificates.

This meeting of the parents came after Chimney began acting weird around Buck. Buck noticed that Chimney was sitting on a secret and was desperate to tell someone, but Chimney was doing his best not to talk because he promised Maddie that he wouldn’t say anything. Chimney was so desperate to spill the beans that he later ended up telling Stan the family’s secrets.

Chimney ran into Stan as he was clearing the office building and Stan had his hand on the detonator. Chimney talked to Stan to get him to relax. It helped calm down Stan and Chimney finally got to talk to someone about the secret. Chimney soon disarmed Stan and turned the scene over to the bomb squad only they ran into Buck as they were leaving the building together.

Stan saw Buck. He was surprised to find out that Chimney had been telling the truth and so Chimney had to close the ambulance doors really fast on Buck because he didn’t want his friend to overhear the secret. What is the secret? Chimney was told a family secret that Buck didn’t know about and it was also about him. Whatever it is, their parents made Maddie promise when she was nine that she wouldn’t tell her brother or anyone else. She broke that promise when she told Chimney and the visit from her parents wasn’t over. Her parents were in town for several days. There was a second dinner and this time the parents got into an argument with Buck. Buck reminded them that they cut off Maddie after she married Doug.

Buck also said that he was in therapy now because they made him feel like a constant disappointment his entire life. His parents had been quick to give up on their children and neither Buck nor Maddie wanted to pretend anymore. They didn’t love their parents. Buck later regretted telling his parents how he felt and he was considering his apology to them when Maddie called.

She kept calling. Maddie didn’t give up until she talked to her brother. They were the only ones who can understand how uninterested were them and it was especially hard because they see healthy relationships between parents and their children. Athena threw a celebratory dinner for May for stopping that bomber. The two talked and it helped May.

Buck and Maddie talked about the gift she received from their parents. It was a bunch of things from childhood and there was even a photo included of a brother Evan never knew he had. He an older brother named Daniel.

Something happened to Daniel and that’s the secret.